A tell-all interview between Mohale and Aldrin coming soon. 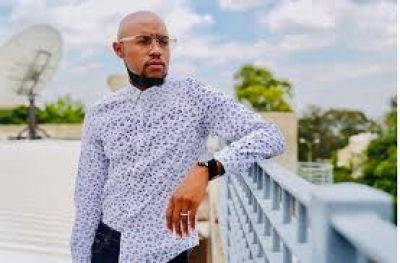 Mohale Motaung will finally be saying his piece after being a hot topic on his ex-husband's reality show, "Living the dream With Somizi", this season.

Motaung is breaking his silence on the matter in a sit-down interview with Aldrin Sampear, host of Unfiltered on SABC 3 and the drive time show Beyond The Headline on SAFM, that's to be flighted on Showmax.

Showmax wrapped the Showmax Original Mohale: On the Record, a tell-all interview between Mohale and Motaung, it announced on Monday.

The special will premiere on 4 August 2022, first on Showmax.

"As a queer person," Aldrin says, "their union has been a celebration of what many would love to achieve but, because of societal norms, have struggled to. Some of us even lived our fantasies through their love story and became invested in it."

But Somhale wasn't the fairytale union it seemed. This became clear when the audio of an off-the-record interview with Mohale was leaked in August 2021, including allegations of how Somizi physically abused him.

Much has been said about the impact of these allegations on Somizi, who took time off from Idols and Metro FM as a result, but is now back on the cover of a magazine this month and sharing his side of the story in Living the Dream With Somizi S5 on Showmax.

But much less has been said about how the alleged abuse, the leak, and the pending divorce has impacted Mohale.

"This sit-down is an opportunity to hear Mohale's version of their union, and now, its cracks," says Aldrin.

A lot has been said about me, both true and untrue," says Mohale.

"I initially had no intentions to publicly speak of the events that have occurred, due to an agreement I had with the other parties involved. But when the agreement was dishonoured by the other party, it became paramount that I tell my truth as I know it. With all the misinformation in the public domain, it is my responsibility to correct any propaganda as I represent not only myself, but those that may have experienced a story similar to mine. I would also like people to truly get to know me for who I am, as opposed to who they have assumed me to be."

According to Candice Fanguiero, head of content at Showmax, the platform made the decision to record this interview because, "having told the story of the wedding, we wanted to explore everything that followed.

"Living The Dream With Somizi S5 is currently the most popular title on Showmax but it’s just one perspective, so we’re now adding Mohale’s voice so he can speak for himself in this special."

Mohale and his husband Somizi Mhlongo became the poster couple for gay marriage in South Africa when their SAFTA-nominated 2020 wedding special, Somizi & Mohale: The Union, was labelled The Union of the Year and set a then record for the most first day views on Showmax.

Their relationship was also a central focus on Living The Dream With Somizi S4, which won the 2020 SAFTA for Best Structured or Docu-Reality Show.

More in this category: « Miss South Africa 2022 top 10 finalists have been announced. Dineo Ranaka quits Metro FM to join Kaya 959. »
back to top