Riding a sipphire black beast into the platinum heartland. 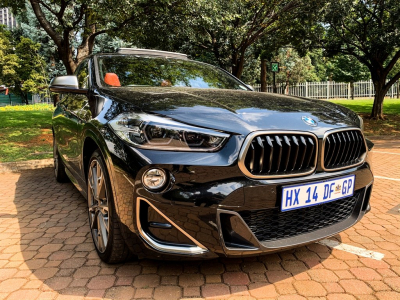 On a morose Tuesday morning with news diary schedules beginning to be stymied by the advent of Covid-19 and whilst striving to keep spirits reasonably motivated, I was just settling onto a comfortable couch and pick up on my current read, Hearing Grasshoppers Jump – Pick ‘n Pay founder, Raymond Ackerman’s biography - at the Mofolo Library in Soweto, when a phone call from a colleague, jolted me into a sudden and most welcome change of plan.

The message it bore unfolded the unexpected gospel that a trip to Sun City Resort to do a profile on the newly appointed General Manager, Brett Hoppe, and which incorporated a two-night sleepover, was in the offing and available to be undertaken to pronto! What more, available too as transportation to get to the destination was a sapphire black beast from Bayerische Motoren Werke, namely, a BMW X2 M35i – at our disposal for a review.

“Somethings in Life only occur to me,” I susurrated a reminder under my now excited breath - one not borne of a belief in the superstitious, but rather from the marvel of the actuality of such exclusive once-in-a-while occurrences – as I rushed home to pick up travelling luggage and thereafter meetup with the outgoing wordsmith at his Orange Grove digs.

It didn’t matter to me that the wheels were not precisely new on the local market – with the model having made its South African debut in early 2019, and still not a year old. I was delving into Denis Droppa terrain!

Arriving at a colleague's place around lunchtime and welcomed with some delicious confectionery, he immediately bade me to familiarize myself with the controls and electronics of the still relatively new automatic SUV parked in the carport – before we could shortly embark on our 190 plus kilometre drive.

What initially greeted me as I settled into the driver’s leather seat was an unavoidable eye-catching cabin in mainly ubiquitous orange on all of the seats, armrests, dashboard area, and inside doors finishing – with black trimmings on the seats combining for an orange and black wooing interior. Having always driven manual vehicles, I spent some considerable while tinkering with the plethora of controls mainly situated on and around the M-Sport steering wheel. Similarly, it took me some
while, albeit brief, to figure out how to breathe the automobile’s engine into life – only picking up on the popup message instructing me to step on the footbrake pedal before pressing the ignition button. Soonly enough, after considerable fidgeting with other requisite where withal, I was gradually reversing out of the driveway and onto the street with relative ease of manoeuvrability – and sans the assistance of the handy camera view.

Since when one undertakes a substantially lengthier trip - almost 200 kilometres in our case – comfort of travel takes precedence and I was suitably satisfied with the power front seats as well as the legroom space that the hatchback crossover had to offer. On the other hand, the orange and black look complemented technology and connectivity provided in the form of a functional 8.8-inch touchscreen supported by an iDrive 6 system. And mentioning some of the eye lolly features, an
iDrive and drive mode button situated around the centre console made for easeful navigation of infotainment settings.

Just before Joburg rush-hour traffic we joined the already building up gridlock at the Linksfield detour just ahead of the Gillooly’s interchange headed north towards the capital and onto the N4 motorway. Propelled by a 2.0-liter, 4-cylinder turbocharged petrol engine and an 8-speed Steptronic gearbox featuring launch control emitting power to all the four unique 19-inch alloy wheels, I found myself gleefully gliding in and out of the fast lane all the way from Lombardy, past Halfway house,
onto the first tollgate at Montana – leading towards Marikana and delving into the Northwest Province. Not that I was lunging at the road in front of us at full throttle – even though the beast possessed the sort of performance as to easily tempt me to dare to – far from that being the case, I was continuing thus within the prescribed speed limits. And whereas my naïve self-reasoned that powerful vehicles are gluttonous gasoline-guzzlers, I noted with surprise – to-and-from Pilanesberg –
that our drive, at a fuel economy figure of 7.4L/100km, was exceedingly reasonable on the petrol since over a round trip of almost 400 kilometres whilst keeping to the maximum speed of 120km/h,the gauge needle shifted only ever slightly.

Bolstered with 225kW and 450Nm of torque, the Munich brand claims this to be able to catapult the all-wheel drive powertrain SAV (sports activity vehicle) from 0 – 100kph in 4.9 seconds – an aspect I couldn’t disagree with as, whilst reclining back with elbow on the armrest and the fading sun’s rays filtering through the sunroof, I flung the agreeable projectile along the N4 en route to Rustenburg and deeper into the Platinum heartland!

The route to our destination being mainly flat though, we couldn’t get the opportunity to tackle steeper terrain in order to discover how the sporty beast would acquaint itself. But at Phokeng, just along the Royal Bafokeng Stadium, I momentarily managed to elicit some attention to it and our duo from commuters from work waiting for their Bojanala buses on the side of the road, by pressing the accelerator onto the floor – with the beast issuing forth an unhinged roar, and resulting in the simultaneous swaying of heads! My proclivity for velocity also discovered exhilarating resonance in the car’s launch control’s capability to deliver rapid sprints from standstill – an irresistible habit I dipped into, enough to adopt it whenever I pulled away at traffic intersection.

Among others on the market, its rivals include the Mercedes-AMG GLA45 and the Range Rover Evoque, and the BMW X2 M35i doesn’t come cheap though, retailing for upward of R800K.

More in this category: « Oprah Winfrey slams ‘FAKE’ report that she was arrested for sex trafficking. Happy Birthday Chaka Khan "Queen of Funk" turns 67. »
back to top