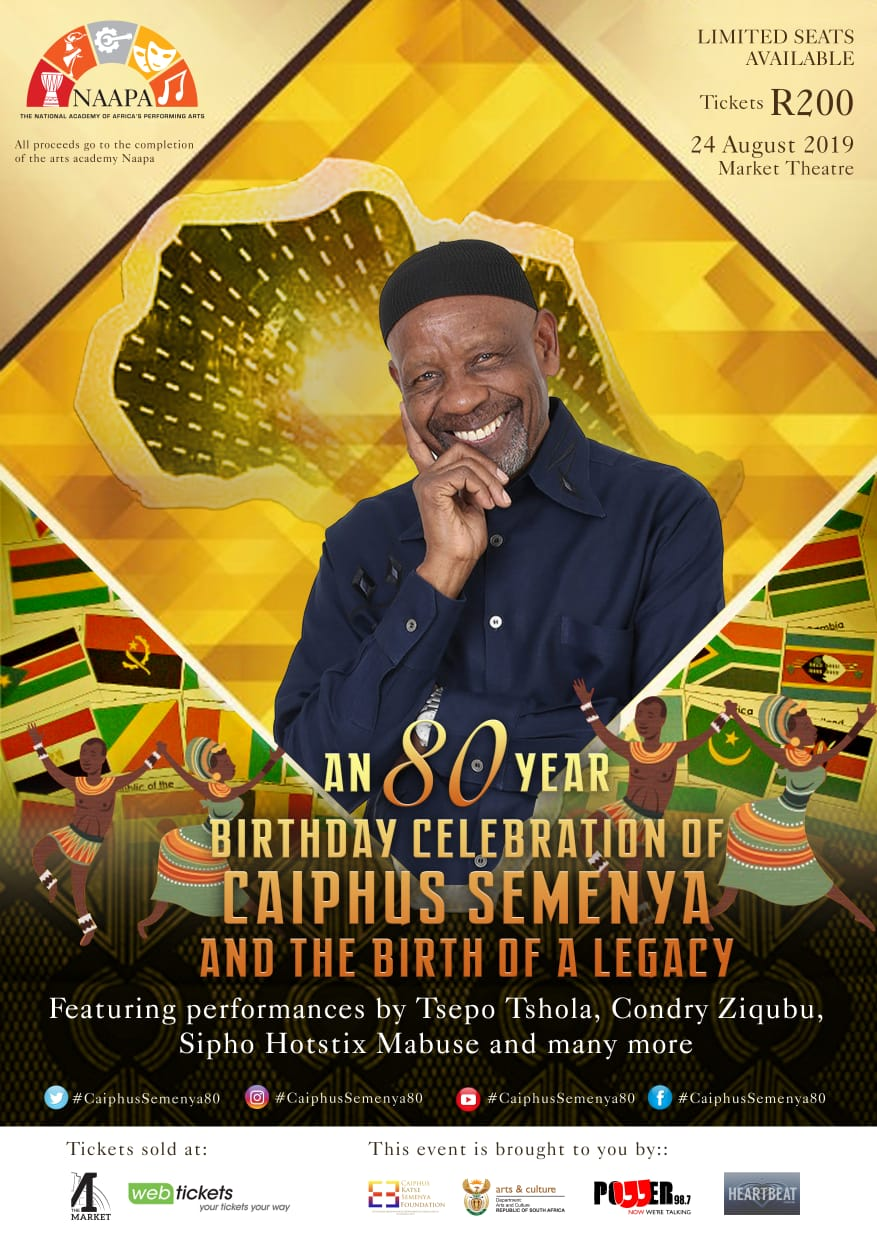 On August 24, The Market Theatre will stage the Caiphus Semenya at 80 Music Extravaganza:  Celebrating a Milestone and the Birth of a Legacy.  Musicians Tsepo Tshola, Sipho Hotstix Mabuse , Condry Ziqubu and many more will pay tribute to Semenya.  The event will also include music from BUWA the theatrical production he penned in 1986 about the injustices of apartheid through the eyes of a photojournalist. The night will be preceded by an intimate dinner before heading out to the John Kani Theatre of the Market theatre.  Semenya’s actual birthday is August 19.

Sello Maake Ka Ncube and Tshepo Mngoma have been roped in as the show director and music director respectively and a carefully selected line-up of performers will present their interpretations of music by Semenya and some songs that he wrote.

The proceeds from the concert will go to Semenya’s National Academy of Africa’s Performing Arts (NAAPA) in Jabulani, Soweto.  The first phase of the school construction has been completed and the second phase of furnishing is set to get underway.

The school is aimed at grooming and nurturing the next generation of musicians, actors, dancers in the tutelage of legends like Semenya, Hugh Masekela, Miriam Makeba, Letta Mbulu, Jonas Gwangwa, Kippie Moeketsi, Zakes Mokae, John Kani, Nomsa Manaka and others.

Semenya, who was born in Alexandra township, found his voice as a teenager in the vocal quartet, the Katzenjammer Kids.  The quartet was named after the 10 cents comic book of the 1950’s.  In 1958, he and his group were recruited by the Union of Southern African Artists which had its headquarters based in Dorkay House.  The purpose of the group’s recruitment was to be a cast member of the musical, King Kong which ran in South Africa from February to December 1959.  And in the UK from February to December 1961.  In 1964 he was again recruited by the Union to travel to New York as a cast member of the musical drama, Sponono.  He subsequently ended up residing and working in Los Angeles.

He has worked with American heavyweights notably Quincy Jones, Harry Belafonte, The Jazz Crusaders, Herb Alpert and others.  He and his wife, Letta, arranged the Swahili chant on Michael Jackson’s ‘Liberian Girl’.  In 1986 Semenya and nine other composers were nominated for the Academy Award for Best Original Score for The Color Purple.  He received an Emmy Award for his role in contributing the African music component of the soundtrack for the hit television miniseries, Roots.

As part of the South African cohort of exiled musicians such as Miriam Makeba, Hugh Masekela and his wife Letta Mbulu they provided a soft-landing pad in the US for artists who fled the brutal and oppressive Apartheid system.

He has contributed to the South African national songbook with classics such as Matswale, Angelina, Ziphi’Nkomo, as well as the powerful collaborations like Ndiphendule with his wife Letta.  In fact, theirs is one of the most enduring, romantic and charming love stories to ever come out of South Africa after 52 years of marriage and working together as a power couple.

When he is not busy with bricks and mortar at NAAPA, Semenya graces many stages as one of the most sought-after performers at music festivals the world over.

Semenya commented: “Turning 80 is a blessing not to be taken for granted.  There are so many colleagues that I started this journey with and unfortunately most of them have since passed away, so it’s with a grateful heart that I look back and appreciate the blessings I received from Ramasedi, the creator of the universe.  As much as there is some fun we will have, I never want us to lose focus on this project that is close to my heart, NAAPA.  I ask that we be generous in giving towards the Academy to ensure that the next Caiphus Semenya is given a chance through one of the many programs that will run at the academy.”

Tweet
More in this category: « The highly anticipated Mantsho x H&M collection is finally here and will officially launch on August 15. After Dawn: Hope after state capture by Mcebisi Jonas »
back to top