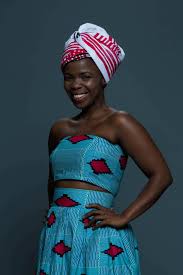 After 17 amazing years with Freshlyground, Zolani Mahola is officially launching her career as a solo artist and public speaker.

Mahola is a South African Storyteller - she is a singer, an actress, a speaker and an agent for social change.

Born in Port Elizabeth in 1981, she studied Theatre and Performance at the University of Cape Town where she met musicians with whom she would later form the band Freshlyground in 2002.

Freshlyground went on to become a household name and one of South Africa’s most acclaimed and successful bands. They captured the heart of South Africa and also claimed global recognition - one highlight of which was a collaboration with pop superstar Shakira with whom they recorded the official song for the FIFA World Cup 2010 and performed it at the closing ceremony for a global audience of over a billion people.

Zolani is well loved and respected by South Africans for unifying a country through music and bridging social, racial and language divides. As an artist, she explores themes of identity and belonging, both for herself and to share the message that, while we are all connected and have so much in common, “our stories are all unique and we have to be curious about our own and each others’ stories, to find the reason we were put on this planet and to be our full expression.”

As part of her solo work, Zolani has staged a tribute show to Ella Fitzgerald (2004). She is recognized in the street for her lead role as Boniswa in the inspirational SABC drama series TshaTsha (2003 - 2005) and her starring role in the feature film Cold Harbour (2014). She has been a judge on the acapella show The Sing-Off (2009) and guest judge on Idols (2010) and The Voice (2016), encouraging uniqueness and a good work ethic in the contestants. She sang the lead in a new South African musical “Calling Me Home” (2017) at the Joburg Theatre.

Courtesy of You Tube.
Tweet
More in this category: « Carrol Boyes - The startup story of iconic South African Designer. Ayanda Jiya's debut album is finally here. »
back to top