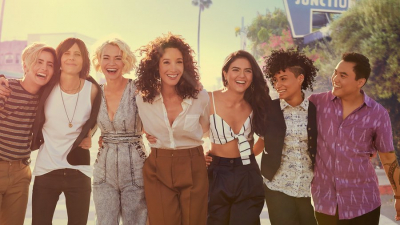 Bad Education is based on the real-life scandal that went down at writer Mike Makowsky's high school, where a student journalist uncovered the single largest public school embezzlement scheme in America's history.

Bad Education has a 92% critics rating on Rotten Tomatoes, where the critics consensus is, "Anchored by an outstanding Hugh Jackman, Bad Educationfinds absurd laughs - and a worthy message - in the aftermath of a real-life scandal."

Billy Batson is a teenage foster kid with a track record for running away and looking out for himself, until he takes a stand against the school bully for his foster sibling Freddy - an act that leads to a strange encounter with an ancient wizard and turns him into grown-up superhero Shazam. Of course, with great power comes the inevitable great enemy, and Billy, aka Shazam, needs to get a handle on his abilities ASAP if he's to fight the evil Dr Thaddeus Sivana.

Shazam! has a 90% critics score on Rotten Tomatoes, where the critics consensus says, "An effortlessly entertaining blend of humour and heart, Shazam! is a superhero movie that never forgets the genre's real power: joyous wish fulfilment."

Dr Louis Creed and his wife, Rachel, move to rural Maine with their two young children. When their daughter Ellie discovers a mysterious burial ground hidden deep in the woods near their new home, Louis is quick to put her at ease. But these woods belong to something else. Something that brings things back from the dead.

"The movie honours King by raising fresh hell for a new generation," says Rolling Stone. "It will make you jump out of your seat, but what matters are the provocations you take home and can't shake. That's the stuff of nightmares."

Josephine Chesterfield (Hathaway) has used her cunning and class to secure a stunning villa and a safe full of diamonds in the south of France, while Aussie Penny Rust (Wilson) flies by the seat of her pants – and the stacks of cash she liberates from gullible marks. They have almost nothing in common, but when tech billionaire Thomas Westerburg (Alex Sharp from How to Talk to Girls at Parties) comes onto their radar, the pair team up for the scam of the year.

The Hustle was the 70th biggest box office hit of 2019 and a People's Choice nominee for Favourite Comedy Movie.

If the storm doesn't get you, the alligators will...

Following a Category 5 hurricane, competitive swimmer Haley and her estranged father, Dave, find themselves trapped in the flooded basement of their run-down house, where every shadow conceals the waiting jaws of a brutal apex predator.

This excellent schlock creature-feature horror is a 2020 nominee for both Best Horror Film at the Hollywood Critics Association Awards and Best Wide Release Film at the Fangoria Chainsaw Awards. It's directed by Alexandre Aja (The Hills Have Eyes) and produced by the legendary Sam Raimi (Evil Dead, 30 Days of Night and Spider-Man).

The 71st biggest box office hit of 2019, Crawl has a 83% critics rating on Rotten Tomatoes, where the critics consensus describes it as "an action-packed creature feature that's fast, terrifying, and benefits greatly from a completely game Kaya Scodelario." Vulture called it "a perfect horror film for the summer, as much an ode to the cataclysmic, humbling aspects of Mother Nature as it is a love letter to father-daughter relationships."

Oscar winner nominee and Golden Globe winner Taraji P. Henson (Empire, The Curious Case of Benjamin Button) stars as Ali Davis, a successful sports agent who's constantly boxed out by her male colleagues. She gains an unexpected edge over them when, after a wild night out with her girls, she mysteriously gains the ability to hear men's thoughts.

What Men Want was the 83rd biggest box office hit of 2019, with Rotten Tomatoes' critics consensus saying, "Easy to like, What Men Want proves a gender-swapped remake can work - and the odds are substantially improved with Taraji P. Henson in the lead."

THE SUN IS ALSO A STAR | Romance

Jamaica-born pragmatist Natasha isn't in the market for romance. In fact, she doesn't even believe in love. Also, she's about to be deported. Then a stranger saves her life on the street and, over coffee, tells her they're meant for one another. It's never going to happen, obviously, but Natasha's willing to give him an hour of her time...

The Sun is also a Star is a coming-of-age love story based on the best-selling young-adult novel by Nicola Yoon, who also penned Everything, Everything.

Charlie (Oscar winner Joaquin Phoenix) and Eli Sisters (Oscar nominee John C Reilly) are very bad men, who are very good at what they do. And what they do is mostly killing.

Infamous assassins in 1850s Oregon, they're the last people chemist Hermann Kermit Warm (Golden Globe nominee and Emmy winner Riz Ahmed from The Night Of) and scout John Morris (Oscar nominee Jake Gyllenhaal) want on their trail, but with gold rush fever in the air, the West is a dangerous place to be a clever man.

Winner of Best Director for Jacques Audiard at both Venice and the César Awards, The Sisters Brothers has an 87% critics rating on Rotten Tomatoes, where the critics consensus calls the Western "a dangerous, witty, and emotionally cathartic exploration of what it means to be a man."

The Sisters Brothers is based on the novel by Patrick deWitt, which was shortlisted for the 2011 Man Booker Prize.

It's been four years since theme park and luxury resort Jurassic World was destroyed by dinosaurs out of containment.  Isla Nublar now sits abandoned by humans, while the surviving dinosaurs fend for themselves in the jungles. When the island's dormant volcano begins roaring to life, Owen and Claire mount a campaign to rescue the remaining dinosaurs from this extinction-level event.

"This is without question the best Jurassic Park sequel," wrote Salon.com. "Smart, scary, and even emotionally powerful."

THE HOUSE WITH A CLOCK IN ITS WALLS | Fantasy

It's the first younger-audience film from gore maestro Eli Roth (Hostel, Cabin Fever), who's called it a "starter horror movie."  Slate calls it "a bullseye... perfectly balanced between funny and scary." Common Sense Media recommends it for 11+.

The House With A Clock In Its Walls was the 54th biggest box office hit of 2018, grossing over $130m globally.

Star Kevin Hart and producer Will Packer, who partnered for the hit Ride Along and Think Like a Man series, bring their signature style to Night School. Directed by Malcolm D. Lee (Girls Trip), the comedy follows a group of misfits who are forced to attend night school in the longshot chance they'll pass the GED exam to finish high school.

Juliet, Naked is the story of Annie, the long-suffering girlfriend of Duncan, and her unlikely transatlantic romance with once revered, now faded rocker, Tucker Crowe, who also happens to be the object of Duncan's musical obsession. When the acoustic demo of Tucker's hit record from 25 years ago surfaces, its release leads to a life-changing encounter with the elusive rocker himself in this comic account of life's second chances.

The film is based on the novel by Nick Hornby, who also wrote About a Boy and High Fidelity.

Juliet, Naked has a 83% critics score on Rotten Tomatoes, with The Los Angeles Times calling it "a charming film... about two very different people trying to press reset in their lives... Comic, heartfelt and smart as they come - a rare combination these days."

Christian (Claes Bang from Dracula) is the respected curator of a contemporary art museum, a divorced but devoted father of two who drives an electric car and supports good causes. His next show is "The Square", an installation which invites passersby to altruism, reminding them of their role as responsible fellow human beings. But sometimes, it is difficult to live up to your own ideals: Christian's foolish response to the theft of his phone drags him into shameful situations. Meanwhile, the museum's PR agency has created an unexpected campaign for "The Square". The response is overblown and sends Christian, as well as the museum, into an existential crisis.

Directed by Ruben Östlund (Golden Globe foreign film nominee Force Majeure), The Square won the Palme d'Or at Cannes in 2017 and was nominated as Best Foreign Film at both the Oscars and Golden Globes in 2018. Golden Globe winner Elisabeth Moss (The Handmaid's Tale) and Golden Globe nominee Dominic West (The Affair, The Wire) co-star.

Tweet
More in this category: « Family Feud rocks the airwaves as 947 and Kaya FM take on each other in a charity drive. 6 Things to do to reduce lockdown stress and stay connected. »
back to top