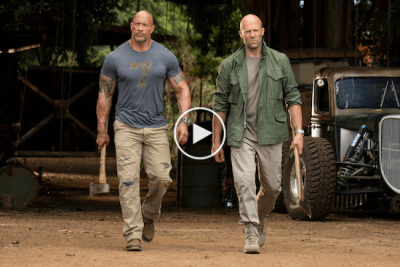 The only thing more satisfying than watching Dwayne Johnson and Jason Statham whup each other's asses is watching them team up to whup someone else's.

Rated 13VL, Hobbs & Shaw was the eleventh biggest film of 2019 at the global box office – and third biggest in South Africa. The crowd-pleasing blockbuster was nominated for four 2019 People's Choice Awards, including Favourite Movie, and four 2020 World Stunt Awards, for Best Fight, Best Work with a Vehicle, Hardest Hit, and Best Stunt Coordinator.

As New York Post puts it, "Who would have thought that one of the most enjoyable buddy-cop movies of 2019 would star a Pokémon?"

21-year-old insurance adjuster Tim Goodman lives in Ryme City, a place where humans and Pokémon co-exist in harmony. As a kid, Tim wanted to become a Pokémon trainer, but things didn't work out that way. Then his dad, ace private eye Harry Goodman, goes missing, and Tim meets Harry's former Pokémon partner, Detective Pikachu – a wise-cracking detective who's lost his memory. Pikachu is astonished to learn that Tim can understand him, and together, the two set out to find out what happened to Tim's dad. But something sinister is afoot in Ryme City, and it's making everyone crazy.

DORA AND THE LOST CITY OF GOLD

Dora has grown up in the jungle with her explorer parents, but now she faces a new challenge unlike any she's survived before: high school! After a sudden, dangerous turn of events, Dora soon finds herself back on familiar ground as she and her best friend, Boots the monkey, must lead Diego, a mysterious jungle dweller, and a group of kids from her school on a perilous trek through the jungle to rescue her parents and uncover the truth behind the legend of the lost city of gold.

Based on the hugely successful animated TV series Dora the Explorer, this spectacular live-action adventure grossed over $120m at the global box office as the 62nd biggest film of last year.

Rated 7-9 PGV, Dora and the Lost City of Gold has a 84% critics rating on Rotten Tomatoes. "The beloved character of Dora, with whom Gen Z grew up, becomes a winning 21st-century heroine in this perky action-adventure flick that pulls heavily from the Indiana Jones movies and other kid-friendly action-adventure classics," says Los Angeles Times, praising "Moner's layered comedic performance," and adding, "She's delightfully dorky, a rare commodity in this day and age of sarcastic, wise-beyond-their-years teens."

After being invited to his first kissing party, 12-year-old Max (Critics Choice winner Jacob Tremblay from Room and Wonder) is panicking because he doesn't know how to kiss. Eager for some pointers, Max and his best friends Thor (Brady Noon from Boardwalk Empire) and Lucas (Keith L. Williams fromThe Last Man On Earth) decide to use Max's dad's drone – which Max is forbidden to touch – to spy (they think) on a teenage couple making out next door. But when things go ridiculously wrong, the drone is destroyed. Desperate to replace it before Max's dad (five-time Emmy nominee Will Forte from The Last Man On Earth) gets home, the boys skip school and set off on an odyssey of epically bad decisions involving some accidentally stolen drugs, frat-house paintball, and running from both the cops and terrifying teenage girls...

The 67th biggest box office hit of 2019 globally, Good Boys was nominated for a 2019 People's Choice Award for Favourite Comedy Movie and has an 80% critics rating on Rotten Tomatoes.IndieWire calls it "adorable and twisted at the same time", while New York Post says, "The filmmakers have their finger on the pulse of the exquisite awkwardness of the tween years."

Heads up that Good Boys has a 16LSDV rating – and is produced by Seth Rogen and Evan Goldberg (Superbad, Knocked Up) - so isn't for kids...

Willowdean ('Dumplin'), the plus-size teenage daughter of a former beauty queen, signs up for her mom's Miss Teen Bluebonnet pageant as a protest that escalates when other contestants follow in her footsteps, revolutionizing the pageant and their small Texas town.

Dolly Parton and Linda Perry's song from Dumplin', Girl In The Movies, was nominated for Golden Globe, Critics Choice, and 2020 Grammy awards.

Rated 10-12PGL, the movie has a 85% critics rating on Rotten Tomatoes, where the critics consensus says, "Elevated by a solid soundtrack and a terrific cast, Dumplin' offers sweetly uplifting drama that adds just enough new ingredients to a reliably comforting formula."

Jared Hedges is the son of a Baptist preacher in a small town, who is confronted with an ultimatum after being forcibly outed to his parents: attend a church-sponsored conversion therapy programme, or lose his family, friends, and faith.

Based on author and LGBTQIA+ activist Garrard Conley's acclaimed autobiographical memoir, this true story is written and directed by Golden Globe-nominated actor Joel Edgerton (The Great Gatsby), who also stars.

Rated 16SV, Boy, Erased won the 2019 GLAAD Media Award for Outstanding Limited Release Film and has a 81% critics rating on Rotten Tomatoes. "It's done with such evident love and sensitivity that it's hard to imagine a human being not connecting in some way," says Associated Press.

This sumptuous art house drama is based on the true story of French novelist Colette, who was nominated for the Nobel Prize in Literature in 1948.

What follows is a series of best-selling semi-autobiographical novels about a bold country girl named Claudine, but despite (or because of) their success, Willy refuses to reveal their true authorship to the world. Colette is the story of an artist's fight for creative ownership and one woman's challenge to society's gender norms and sexual mores.

Colette was nominated for a 2019 Independent Spirit Best Screenplay award and has a 87% critics rating on Rotten Tomatoes, where the critics consensus says, "A brilliant match for its lead, Colette is a thoroughly entertaining biopic and an overdue testament to Keira Knightley's underrated gifts."

People's Choice winner Dwayne Johnson (Hobbs & Shaw, Ballers) stars as former FBI Hostage Rescue Team leader and U.S. war veteran Will Sawyer, who now assesses security for skyscrapers.  On assignment in China, he finds the tallest, safest building in the world suddenly ablaze - and he's been framed for it. A wanted man on the run, Will must find those responsible, clear his name and rescue his family, who are trapped inside the building, above the fire line...

The 32nd biggest box office hit of 2018 globally, Skyscraper was nominated by the Academy of Science Fiction, Fantasy and Horror Movies for a 2019 Saturn Award for Best Action-Adventure Film, and earned Johnson 2019 Kids Choice nominations for Favourite Movie Actor and Favourite Butt Kicker.

As The Wall Street Journal puts it, "The movie is great, outlandish fun because the star makes it so; he's a soft soul in an action-hard body."

Tweet
More in this category: « Spotify announces Willy Cardiac as the latest RADAR artist. Actresses,Performers,Comedians…Talent abounds in Family Feud this week as celebrities take each other on. »
back to top