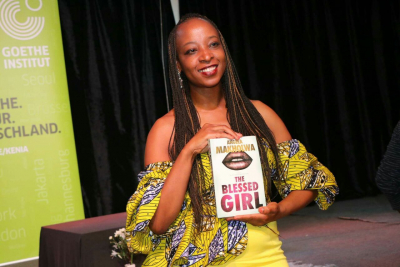 Pan Macmillan South Africa is delighted to announce that Angela Makholwa's fourth novel, The Blessed Girl,published in the United Kingdom by Bloomsbury, has been short-listed for the Comedy Women in Print Prize.

Judges for this award are Marian Keyes, Lolly Adefope, Pauline McLynn, Joanna Scanlan, Paula Wilcox and last year's prize winner, Laura Steven. Keyes, who chaired the panel said: "I am absolutely delighted with our list. The range is glorious – everything from light-hearted commercial fiction to literary fiction – from established names to new talent – and it's a demonstration of all the different ways in which women can be funny in print. It was a pleasure and very exciting to read all the submissions, and these are shortlists we are very proud of."

Angela Makholwa said: "I'm honoured to have been shortlisted among such brilliant female comic writers. It's affirming to finally see women's writing being acknowledged for its diversity instead of having our writing being classified according to our gender. I hope this prize heralds a new era where we will see terms like 'Chick Lit' being replaced by more nuanced categorisations of our work."

The winner will be announced at a ceremony in London, UK on September 14, 2020.

Tweet
More in this category: « 13 BAFTA nominees to stream this weekend, from Chernobyl to Killing Eve, His Dark Materials to Gentleman Jack. How do you choose your team for Family Feud? Well, if you're a family of 11 siblings you might need to put names in a Hat! »
back to top