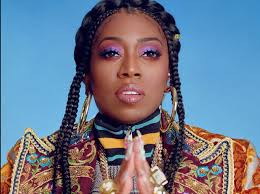 After 14 years of single releases and highly publicized performances, hip-hop pioneer Missy Elliott is making a triumphant return to music with Iconology, her first collection of new songs since 2005's The Cookbook.

About the new release, Missy said: "This year has been a tremendous year for me… I am humbled and grateful."

On Monday, August 26, Missy Elliott will be honored with the MTV VMAs Video Vanguard Award. Earlier this year she entered the Songwriters Hall of Fame. Missy referenced the VMAs in “Throw It Back,” rapping that she has “so many VMAs that i could live on the moon” during a simulated moon-landing sequence in the video (the iconic awards are in the shape of an astronaut planting a flag on the moon).

Tweet
More in this category: « Nomzamo Mbatha and Garcelle Beauvais join Coming 2 America Tributes continue to pour in following the death of SABC Sport Analyst David Kekana. »
back to top