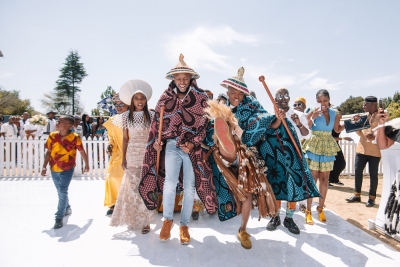 June is Pride Month, a celebration of all things LGBTIAQ+. One area where there's lots to celebrate is film and TV: this year alone, Somizi & Mohale: The Union broke records on Showmax; Elton John biopic Rocketman won an Oscar and a Golden Globe; and, earlier this month, Gentleman Jack was nominated as Best Drama and Euphoria as Best International Series at the BAFTAs – the biggest TV awards in Britain. Showmax has compiled a Pride Month watch-list anyone can enjoy, regardless of their sexual identity.

Born in 1791 in Halifax, England, Lister confounded her society's expectations of women at every turn: she was a landowner and industrialist who dressed like a man and had an astute mind for business; she travelled widely and studied under a surgeon in Paris when she was forbidden to attend university; and she married a woman in what's thought to be Britain's first lesbian marriage. As Slate put it, "It's tempting to believe that Anne Lister was the most fascinating person of the 19th century."

At this year's BAFTAs, Gentleman Jack is up for Best Drama and Jones is nominated as Best Actress. The HBO-BBC collab also won Best Drama Series at the 2020 Royal Television Society Award and Best Production Design from the 2019 British Film Designers Guild Awards, while The Society of LGBTQ Entertainment Critics nominated it as Unsung TV Show of the Year.

Rocketman is the story of how a little boy called Reginald Kenneth Dwight grew into Sir Elton John, one of the greatest musical icons of all time. It's a celebration of the music, the dreams, and the larger-than-life persona that's made Elton a legend, as well as the story of his struggle with addiction, and of his friendship with his long-time lyricist Bernie Taupin, who helped him through.

The 39th biggest box office hit of 2019 globally, Rocketman has an 89% critics rating on Rotten Tomatoes, where the consensus says, "It's going to be a long, long time before a rock biopic manages to capture the highs and lows of an artist's life like Rocketman."

"Good Kenyan girls become good Kenyan wives," but Kena (Samantha Mugatsia, who won Best Actress at Carthage 2018 and FESPACO 2019 for the role) and Ziki (Sheila Munyiva) long for something more. When love blossoms between them, the two girls are forced to choose between happiness and safety.

Rafiki has a 94% critics rating on Rotten Tomatoes, with Variety calling it "impossible not to celebrate"; RogerEbert.com "a lyrical ode to finding a kindred spirit amidst an uncaring majority"; AV Club "bursting with life"; and Washington Post "a small revelation, not least because it marks the breakthrough of a filmmaker of such exhilarating, cheerfully courageous vision."

Rafiki was nominated for the Un Certain Regard and Queer Palm Awards at Cannes 2018, as well as a 2020 GLAAD Media Award nomination for Best Limited Release Film. The movie catapulted director Wanuri Kahiu onto Time Magazine's 100 Next list in 2019 and launched her career internationally. She's now adapting Octavia Butler's Wild Seed for Amazon Prime and Ali Benjamin's The Thing About Jellyfish for Universal, among other projects.

KANARIE
Two-time Comics' Choice winner Schalk Bezuidenhout, who also won a SAFTA for his supporting role in the kykNET comedy Hotel, stars in Kanarie as a small town boy during Apartheid who is chosen to serve his compulsory two-year military training in the South African Defence Force choir, where he discovers his true self through hardship, camaraderie, first love, and the liberating freedom of music

Directed by Christiaan Olwagen (Poppie Nongena), Kanarie was nominated for a 2020 GLAAD Media Award in the Outstanding Film – Limited Release category, while Indiewire named it one of the 14 Best LGBTQ International Films of 2018. Locally, Kanarie won the 2019 SAFTA for Best Script and five 2018 Silwerskermfees Awards, including Best Film and Best Director.

Kanarie has a 100% critics rating on Rotten Tomatoes, with The Los Angeles Times praising it as a "rich, poignant and finely observed musical-drama" and The Hollywood Reporter as "a winning combination of thoughtfulness and exuberance."

EUPHORIA S1
In this adults-only high school drama series, Zendaya (K.C. Undercover, Spider-Man: Homecoming and The Greatest Showman) stars as 17-year-old Rue, who returns home from rehab with no plans to stay clean, and falls for the the new girl in town, Jules (played by trans superstar Hunter Schafer).

Euphoria has an 8.3/10 rating on IMDB and a 82% critics rating on Rotten Tomatoes, where the consensus says, "Euphoria balances its brutal honesty with an empathetic -- and visually gorgeous -- eye to create a uniquely challenging and illuminating series, held together by a powerfully understated performance from Zendaya."

BOY, ERASED
Jared Hedges is the son of a Baptist preacher in a small town, who is confronted with an ultimatum after being forcibly outed to his parents: attend a church-sponsored conversion therapy programme, or lose his family, friends, and faith.

Based on author and LGBTQIA+ activist Garrard Conley's acclaimed autobiographical memoir, this true story is written and directed by Golden Globe-nominated actor Joel Edgerton (The Great Gatsby), who also stars.

Rated 16SV, Boy, Erased won the 2019 GLAAD Media Award for Outstanding Limited Release Film and has a 81% critics rating on Rotten Tomatoes. "It's done with such evident love and sensitivity that it's hard to imagine a human being not connecting in some way," says Associated Press.

Generation Q was up for a 2020 Queerty for Best TV Series and is nominated for a 2020 GLAAD Media Award for Outstanding Drama Series. The show has an 83% critics rating on Rotten Tomatoes, where the critics consensus says Generation Q "has style and charm to spare and announces a new phase for The L Word that will please new and old fans alike."

Showmax also has all six seasons of the original hit series.

SOMIZI & MOHALE: THE UNION
Somizi Mhlongo and Mohale Motaung formally invite you to witness not only the union of their love but also the merging of their families and their respective Zulu and Sotho cultures – in the Showmax Original, Somizi & Mohale: The Union. From their traditional wedding in Kibler Park in Johannesburg in September 2019 to their white wedding in Muldersdrift on 30 January 2020, Somhale's four-part wedding special is a front-row seat to one of the most historic, heartfelt and not forgetting fabulous weddings in South African celebrity history.

Somizi & Mohale: The Union took the crown as the show with the most views ever on its first day on Showmax, bigger than any Hollywood blockbuster show.

MRS. FLETCHER S1
Based on the bestselling novel by Tom Perrotta (The Leftovers, Little Children), Mrs. Fletcher is a dual coming-of-age story chronicling the personal and sexual journeys of an empty-nest mother and her college freshman son, who both embrace their newfound freedom with mixed results.

Emmy nominee Kathryn Hahn (Transparent) stars in the title role, while Emmy nominee Jen Richards (Nashville) is excellent as Eve's transgender writing teacher Margo - a character who Indiewire says "flouts trans stereotypes in several notable ways: She's well past transition, her trans-ness is secondary to her character's purpose in the story, and — most importantly — she's desired and courted by a cis man."

Mrs. Fletcher was nominated for Best Limited Series at the 2020 GLAAD Media Awards, was included in Best of 2018 roundups by the likes of GQ andUproxx, and has an 84% critics rating on Rotten Tomatoes, where the consensus calls it "empathetic and poignant... the perfect showcase for the luminous Kathryn Hahn."

INXEBA | THE WOUND
Directed by John Trengove, Inxeba tells the story of Xolani (Nakhane), a lonely factory worker, who joins the men of his community in the mountains of the Eastern Cape to initiate a group of teenage boys into manhood. When a defiant initiate from the city discovers his best-kept secret, Xolani's entire existence begins to unravel.

Inxeba is one of the most talked-about South African movies of the last decade. Local cinemas were forced to cancel screenings after death threats and protests about its depiction of the secret Xhosa initiation ritual, then the Film and Publications Board Tribunal reclassified it as pornography (it's not) after complaints from traditionalists, essentially banning it from mainstream cinemas. The classification was later overturned in the North Gauteng High Court.

I-D Magazine called it "the most important LGBT film you will see in 2018... through the character of Xolani we are introduced to a world where homosexuality is still simply not an option." The excessive protests against the film laid bare the rampant homophobia that remains in parts of South Africa.

In addition to a 90% critics rating on Rotten Tomatoes, Inxeba was Oscar-shortlisted and won over 25 international awards, including the Sutherland Award for best first feature at the London Film Festival, the Grand Jury Award at LA Outfest, and Best Actor for Nakhane at Palm Springs.

VIDA S1-2
This half-hour drama focuses on two Mexican-American sisters from the East Side of Los Angeles who couldn't be more different or distanced from each other. Circumstances force them to return to their old neighbourhood, where they are confronted by the past and the discovery that their deceased mother was in a lesbian marriage.

Given the choice, neither the sisters, nor Vida's wife, Eddy, would have anything to do with one another. But they are bound together by the keenly felt absence of the woman who shaped their lives (for better or worse) and by the beleaguered bar and apartment building they've inherited in a three-way split.

Vida has captivated the critics, earning itself a rare 100% critics rating on Rotten Tomatoes and fourth place on Time Magazine's Best of 2019 list. As AVClub says, "Vida is rightly lauded for its excellent performances, incisive writing, and commitment to centering queer, female and non-binary, and Latinx voices both in front of and behind the camera. But you know what? It's also one of the best-looking shows on TV. The cinematography is top-tier. The direction is impeccable. It's beautiful, immersive, often dreamlike filmmaking."

Vida was nominated for a 2020 GLAAD Media Award as Best Comedy Series and won the Audience Award at SXSW 2018.

DIE STROPERS | THE HARVESTERS
This tense, beautifully filmed drama is set against the backdrop of the farmlands of the Free State, where a deeply religious and heavily patriarchal Afrikaans family takes in hardened teenage street orphan, Pieter, throwing 15-year-old Janno's life into turmoil as he is forced to confront his sexuality while competing for his place in the family and his mother's love.

Die Stropers has a 92% critics rating on Rotten Tomatoes. Los Angeles Times hailed it as "a profound story of brotherhood with semi-biblical undertones... darkly powerful," while The Hollywood Reporter praised it as "yet another incisive exploration of one of the numerous and complex facets of masculinity in South African culture after such critical hits as Oliver Hermanus' Beauty (Skoonheid) and John Trengove's The Wound."

Die Stropers was nominated for the Un Certain Regard and Golden Camera awards at Cannes and won the Grand Prize at Chéries-Chéris, the LGBTI film festival in Paris.

South African director Etienne Kallos won Best Short Film at Venice for Eersgebore (Firstborn) in 2009, while his script for Die Stropers picked up prizes at both Cannes and Sundance even before production began.

Winner of Best Feature Film at Jozi Film Festival in 2019, (S)he is a 52-minute film from Sean Steinberg, who also made the award-winning short Axis Mundi and wrote on hit series like The Girl From St Agnes and iNumber Number.