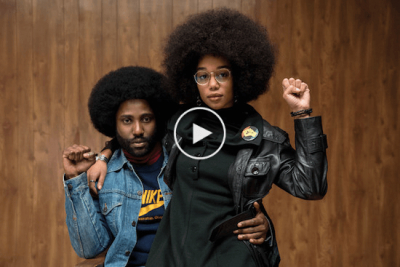 BlacKkKlansman. How To Train Your Dragon 3. The Secret Life of Pets 2. Yesterday. Time Freak.

BlacKkKlansman tells the bizarre true story of Ron Stallworth, Colorado Springs' first African-American detective, who attempts to infiltrate the local Ku Klux Klan in the 1970s... with the help of a Jewish stand-in.

The film won auteur-director Spike Lee a long-overdue Oscar for Best Adapted Screenplay, making it his first competitive Academy Award in a 34-year career that's included films like Do The Right Thing and Malcolm X. BlacKkKlansman also won the Grand Prix at Cannes; was nominated for four Golden Globes, including Best Drama; and is ranked third on Rotten Tomatoes'recent list of the Best Black Movies of the 21st Century.

Lee and producer Jordan Peele (Get Out, Us) released BlacKkKlansman just after the Unite The Right white supremacist rally in Charlottesville in 2017, which features at the end of the film, but Blackkklansman sadly feels even more timely now, in light of Black Lives Matter.


HOW TO TRAIN YOUR DRAGON: THE HIDDEN WORLD
Inseparable besties Hiccup and Toothless, the big screen's most adorable dragon ever, are back for their final adventure in the beloved Dreamworks threequel inspired by Cressida Cowell's best-selling book series. Hiccup and Astrid have created a utopia for dragons and vikings alike, but now a new danger threatens everything they love, just as Toothless finds a potential girlfriend...

The Hidden World was nominated for a 2020 Oscar for Best Animated Feature Film, as well as a Golden Globe, six Annies and two People's Choice Awards. Rated 7-9 PGV, The Hidden Worldwas the 14th biggest film at the global box office in 2019, grossing over $500 million, and has a 91% critics rating on Rotten Tomatoes.

THE SECRET LIFE OF PETS 2

With a new baby in the house, our favourite Jack Russel, Max, lands himself in pet therapy for stress and finds a mentor in the form of a Welsh Sheepdog, Rooster.

Rated PGV, the film has a 90% audience rating on Rotten Tomatoes, with both Guardian and Variety hailing it as even better than the original 2016 blockbuster.

Jack Malik (Himesh Patel in a 2019 Teen Choice-nominated performance) is a small-time singer-songwriter in an English coastal town who's rapidly facing the reality that his dream probably isn't going anywhere, in spite of the fanatical support of his best friend, manager and biggest fan, Ellie (People's Choice, Teen Choice and Kid's Choice nominee Lily James from Mamma Mia! Here We Go Again, Baby Driver, Cinderella). Then there's a mysterious global blackout, Jack gets hit by a bus, and wakes up to find that The Beatles never existed...

Yesterday was nominated for a People's Choice Award for Favourite Comedy Movie, a Teen Choice Award for Choice Summer Movie, and a Saturn Award for Best Fantasy Movie, as voted by the Academy of Science Fiction, Fantasy and Horror Films.

Yesterday is written by Oscar nominee Richard Curtis (Love Actually, Four Weddings and a Funeral) and directed by Oscar-winning director Danny Boyle (Slumdog Millionaire, Trainspotting). It has a gorgeous, feel-good soundtrack that Beatles fans (and most humans with a pulse) will adore, a modern-day fairytale of a love story, and endearing performances from a charming cast that includes  BAFTA nominees Sanjeev Bhaskar and Meera Syal (The Kumars at No. 42) as Jack's conservative and musically-clueless parents; Emmy winner Kate McKinnon (Saturday Night Live), Ed Sheeran, and the best cameo ever from Emmy nominee Robert Carlyle (The Full Monty, Trainspotting).

You know that time you messed up in a relationship and got your heart broken, maybe let the one that could have been The One slip through your fingers? Well, what if you could go back and fix it ? What if, like teen genius Stillman, you had a time machine, that would give you all the do-overs you needed to get it right?

THE BEST BLACK FILMS OF THE 21ST CENTURY
In addition to Blackkklansman, other films on Rotten Tomatoes' list you can stream on Showmax include Creed (#12), Fruitvale Station (#21, trailer above),O.J.: Made In America (#24), Straight Outta Compton (#43), Creed 2 (#45), Barbershop: The Next Cut (#63), Akeelah and the Bee (#77), and Barbershop(#89). Look out for Jordan Peele's multi-award-winning Us, starring Lupita Nyong'o, which is ranked second on Rotten Tomatoes' list and premieres on Showmax on 16 July 2020.

Tweet
More in this category: « Blessing Ngobeni | Chaotic Pleasure | 25 June - 05 July 2020. These Are Not Gentle People: A True Story by Andrew Harding. »
back to top