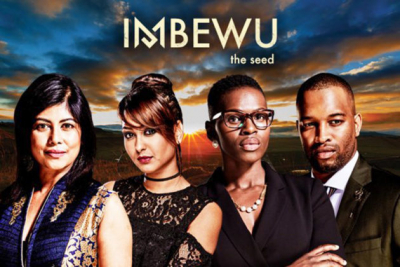 Imbewu on e.tv is the latest primetime series on South African television to shut down due to a positive case of Covid-19.

"e.tv can confirm that a positive case of Covid-19 has been recorded on the late prime weekday show Imbewu. The KwaZulu-Natal local production premises have shut down, and the necessary testing for exposed cast and crew members is underway," said e.tv in a statement.

"The set will undergo deep cleaning to further minimize the risk of contamination, as per Covid-19 protocols. In respecting the privacy of our talent, cast and crew's medical and health matters, we will not be issuing the names of any affected individuals."

e.tv said that "the health of affected employees will be monitored over time, and filming will resume when it is safe to do so as set out by health authorities. All Covid-19, level 3 protocols, and guidelines will once again be adhered to with stringent controls once the required cast and crew are back on set."

This stretches from weekday primetime soaps, and series like Suidooster and Arendsvleiproduced in Cape Town, to Johannesburg where the soap Binnelanders, the call-in music show Kom Ons Jol, and its current affairs strand KN Verslag are all filmed.

Binnelanders, Suidooster and Arendsvlei will, however, continue to broadcast new episodes.

kykNET said "No disruption of daily dramas and telenovelas is expected because these programmes are filmed months in advance. Since the start of level 3 regulations, some of these productions have also adjusted their shooting schedules to six working days a week, using smaller, rotating crews."

Tweet
More in this category: « Old Mutual’s New TVC Strikes A Fine Balance Between The Art And Science Of Storytelling. Legendary actress Mary Twala, has died, aged 80. »
back to top