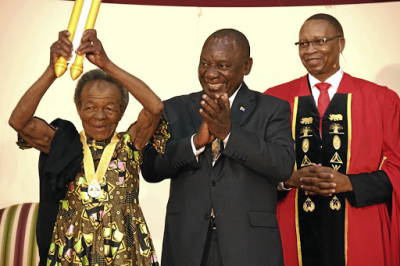 Veteran actress Mary Twala who received the Order of Ikhamanga from President Cyril Ramaphosa has died.
Photo: via Twitter/@PresidencyZA.

Veteran South African actor Mary Twala has died at the age of age 80.

Details around Twala’s death are still unclear, but news of her passing was revealed by her son, Somizi Mhlongo, through a post on Twitter on Saturday.

Taking to social media, the "Somizi & Mohale: The Union" confirmed the death of his mother in a Twitter post dedicated to her, "My tree has fallen........lala Ma" along with a picture.

Twala has been a prominent fixture in the local entertainment scene having starred in local films and television shows.

Starring the first season of the popular soapie "Generations" as a guest star, also starring in "Ubizo: The Calling" and her iconic role as Ma Dolly in "Hopeville" which saw her get nominated for best supporting actress at the 6th Africa Movie Academy Awards. She also starred alongside her son in the "Sarafina!" in 1992.

Recently Twala starred in "Beyond the River" and "The Imposter".

Somizi also thanked the country for the lifelong love and support they showed his mother and his talented family as a whole throughout the years.

“Thank u SA for loving the phenomenal superstar that is my mother ... she left us peacefully about 11am at Parklane private hospital as I was on my way to drop off her gown and a few minutes earlier the doctor called to say come she's up and jolly now ... I arrived a few mon late... Lala ma..”

Twala was also among the senior citizens President Cyril Ramaphosa bestowed with the 2019 National Orders Awards.

Tweet
More in this category: « Imbewu stopped filming due to a positive case of Covid-19. Veteran playwright Welcome Msomi has died. »
back to top