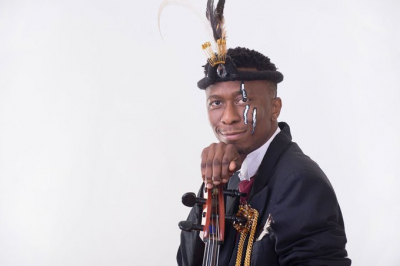 The 35-year-old KZN-born composer and cellist, who is currently based in Paris, is set to showcase Indlela ebheke e-Azania on 23 July – his latest musical offering – after having released his debut album, Zulu Song Cycle, last year.

Mhlambi is not your usual musician. Apart from playing the cello, singing and composing his own songs, Mhlambi also uses his art and exhibitions in order to convey African stories/philosophies.

The first part of this musical work is 'Indlela': which covers the journey traversed by abahwebi to distance lands in the region.

The second part is called 'Rhapta': which remembers the city-life of this trade port, as well as its strong communities surrounding it.

The third part is called 'Kuumbi': which is about the cave which acted like a hotel, where sojourners would stay whilst conducting their business in the trade vicinity.

Mhlambi, who received his Phd in Music at the University of Cape Town, has been based in Paris since January earlier this year. He says he is proud to celebrate African legacies through this work.

"This is a very important story about our African internationalism, which is important to tell at this time given the global movements such as #BLACKLIVESMATTER, what people of African descent are saying all over the world, is that they want to be seen, and recognised even in the content they view. The digital format of the concert allows people anywhere in globe to check it out."

Mhlambi has showcased his work at leading platforms such as the National Arts Festival in Makhanda (Grahamstown), Baxter Theatre, Soweto Theatre and most recently State Theatre in Pretoria—where he has drawn audiences from all walks of life.

He has also been visiting lecturer at universities in Finland (Jyvaskyla), Brazil, to mention a few. And has had opportunities to perform and speak in places such as New Orleans, São Paulo, Maputo (Mozambique), New York and Vancouver (Canada).

In 2019, he collaborated with revered Chinese visual artist Dachan, in a live performance/installation at the Zeitz Mocca Museum in Cape Town.

Mhlambi says the decision to host a free concert was to access a global audience.

"We needed a format that is considerate for the times, where social distancing is a big issue. But also the online format opens it up for audiences to be able to watch and not to feel excluded."

This musical production is presented through the partnership of Afropolitan Explosiv, Baxter Theatre, Goethe-Institut and the Re-centring AfroAsia: Musical & Migrations in the Precolonial Period (700-1500AD) project at the University of Cape Town.

Tweet
More in this category: « The Meaning of Mariah Carey, A Memoir by the Global Superstar. South Africa lost yet another music icon in Patricia Majalisa. »
back to top