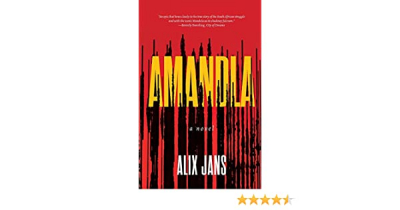 Nelson Mandela buried his Makarov semiautomatic pistol on Liliesleaf Farm in 1962 shortly before his betrayal by the CIA and capture by the South African Police. To this day the gun has never been found. This tantalizing and historically documented fact is the catalyst for this high concept novel, which is set against the backdrop of the country's violent history, vivid landscape, and the rise of apartheid.

Amandla is told from the points of view of memorable characters whose lives are inextricably entangled through three generations of Mandela’s and the De Beers’ families. Their fictional forebears fight at the Battle of Blood River in 1838, and again in the Boer War. Both families face the horrors of segregated genocide in black and white concentration camps, as well as enduring destitution as manual labourers on farms and in mines.

In the drama that unfolds, a tragic misunderstanding leads to a personal vendetta that mirrors the prejudices at the heart of each group’s inability to comprehend the aspirations of the other, culminating in an attempt to assassinate Mandela – with his own gun!

“The only aspects of the Mandela family that are based on the historical record are the life of Nelson Mandela himself and the fact that his father, Henry, served as counsellor to a tribal king. I was not able to find a record of Henry’s earlier life, or that of his father, the fictional Gadla – that thread of the story is pure fiction,” says Alix Jans.

Jans says the book took 13 years to write, and that he visited the majority of the historic sites he writes about. “I was determined to be as faithful to the historic record in the context of a fictional narrative as possible, and to weave my characters into the historical record without doing a disservice or injustice to that record,” says Jans, who hopes those who read the book will be entertained, informed and left just a little breathless as they turn the last page.

Tweet
More in this category: « Watchmen leads Emmy nominees; breakthroughs for Insecure... South Africans will be able to watch Beyoncé's new visual album, Black Is King tonight. »
back to top