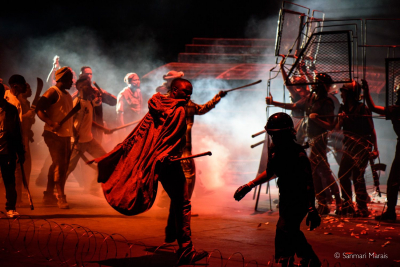 The South African State Theatre (SAST) will take to online to stream the critically acclaimed  Marikana-The Musical from 12 August to 06 September 2020. The theatre has yet again succumbed to the insatiable public demand for this theatrical powerhouse.

Marikana – The Musical is a much loved South African musical adapted by the renowned playwright and director, Aubrey Sekhabi from the book “We Are Going to Kill Each Other Today”- The Marikana Story penned by eminent South African writers , Thanduxolo Jika, Felix Dlangamandla, Lucas Ledwaba, Sebabatso Mosamo, Athandwa Saba and Leon Sadiki.

On 16 August 2012, the police opened fire on a crowd of striking mineworkers at Marikana, Northwest. The fateful incident left 34 mineworkers dead. The protesting mineworkers were demanding a wage increase at the Lonmin platinum mine. The event was described as the biggest incident of police brutality since the advent of democracy and it revived memories of the brutality suffered under Apartheid security police.

A forty-strong award-winning cast led by the formidable Meshack “Mimi” Mavuso, Aubrey Poo, Emma Mmekwa, Siyasanga Papu and Mpho “Mckenzie” Matome unleash a blow by blow account of the events that led to the loss of 44 lives at the hands of the police and the miners. Marikana - The Musical goes back to the villages and townships where they came from and give faces and names to the fallen brothers, sons, fathers, and uncles.

Marikana– The Musical was last seen on stage in 2017 at the State Theatre. After its showstopping premiere in 2014, this explosive musical gained the respect of audiences and critics alike and won six Naledi Awards out of 18 unprecedented nominations in 2015. Coupled with rave reviews, the overwhelming public demand influenced the second season of the show in the same year.

To watch Marikana– The Musical, fans can subscribe to SAST YouTube channel and wait for the show to premiere on 12 August 2020 at 20:00.

Twitter
More in this category: « Life With Kelly Khumalo in the age of Covid-19: Single parenting with two banned businesses. SAMA 2020- Here are all the winners from night 4. »
back to top