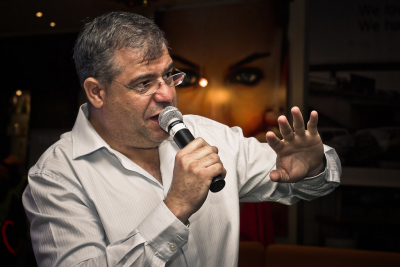 The award-winning Anastasiou dedicated his entire radio career to Talk Radio 702 - accomplishing many milestones and achievements along the way.

He went on to revolutionise the way that traffic was reported on radio becoming the unforgettable "Eye in the Sky" while reporting from the 702 chopper for over two decades.

Over the years, the name Aki Anastasiou has become synonymous with up-to-the-minute traffic reports, great wit, humour and warmth that kept listeners glued to the radio.

He developed a niche and reputation as a much sought-after technology journalist, hosting 'Technobyte' - South Africa's longest running technology show on radio.

Anastasiou said "it's been an honour and privilege to serve the listeners of 702 throughout the three decades at the radio station. Whether it was guiding them to work in the traffic or MCing station events, 702 listeners have always welcomed me into their cars, offices and homes with open arms."

"702 has been like a family to me, I value the wonderful connections I've made with listeners and colleagues throughout my career. It's been an incredible journey" he added.

Anastasiou - who was the recipient of two Paul Harris awards from the Rotary Foundation and the winner of the Liberty radio Award for Best Traffic Reporter - was proud to be involved in many of the stations most successful projects, including:

⁃           The "Get Well Madiba" bouquet that raised more than R1 million for the Nelson Mandela Foundation.

⁃           As 702's former Marketing and Promotions manager, Anastasiou worked on numerous station concerts, the first Walk The Talk as well as the Concert at The Zoo.

While Anastasiou leaves 702, he is adamant this not the end of his radio career "This is only a goodbye on this frequency, but broadcasting and modern technology have not seen the last of me. I have many new great professional adventures ahead of me, which I hope to share soon" said Anastasiou.

Tweet
More in this category: « The Nubian Music Festival at Sun City, 29 August from 3pm. New trailer for Life With Kelly Khumalo; second half of the season now on Showmax. »
back to top