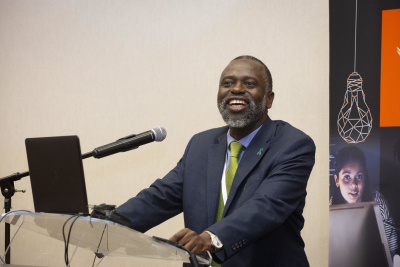 Pan Macmillan will be releasing Closing the Gap: The Fourth Industrial Revolution in Africa, by Professor Tshilidzi Marwala.

Closing the Gap is an accessible overview of the fourth industrial revolution (4IR) and the impact it is set to have on various sectors in South Africa and Africa. It explores the previous industrial revolutions that have led up to this point and outlines South Africa's position through each one. With a focus on artificial intelligence as a core concept in understanding the 4IR, this book uses familiar concepts to explain artificial intelligence, how it works and how it can be used in banking, mining, medicine and many other fields.

Marwala was born at Duthuni Village in the Tshivhase region of the Limpopo Province on 28 July 1971. He attended the Dimani Agricultural High School and matriculated from the Mbilwi Secondary School in 1989. In his matriculation year, Marwala entered and won the National Youth Science Olympiad and was sent to the United Kingdom to attend the London International Youth Science Fortnight.

The youthful Marwala used the opportunity to visit the University College of London and Oxford University where he gained an appreciation of the importance of engineering and science for the development of modern society.

He has also been appointed as Deputy Chair of the Presidential Commission on the Fourth Industrial Revolution.

More in this category: « Spotify Launches Global RADAR Hub On-Platform to Celebrate Program's Six Month Anniversary. The circle of life brings Lebo M to reality TV in the next Showmax Original. »
back to top