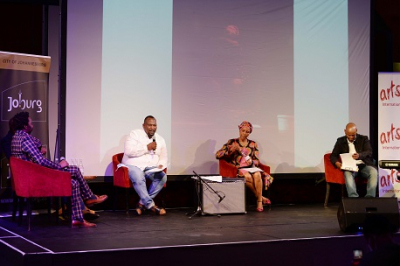 Arts Alive Virtual Festival 2020, a project of the City of Joburg, has had a fantastic launch with a series of great virtual concerts and events including the annual 28thedition of Jazz on the Lake on September 13th. The virtual Jazz on the Lake concert attracted over 40 000 views in the first few days of the stream, a number that has grown exponentially. Arts Alive has hosted relevant webinars and educational cultural workshops, including the international webinar on the future of the visual arts markets, as well as a unique and contemporary comedy / theatre show written and directed by Standard Bank Young Artist award winner Jefferson Tshabalala.

Many other virtual events of the Festival have taken place including the recently successful Beat Makers Market as well as the 7th Soweto Art Week at the Soweto Theatre over the last week.

October 2020 is once again highly packed with an exciting diverse range of concerts, dance performances, workshops and webinars. All events are free and will be streamed on the various #ArtsAlive online platforms.

Some of the main attractions are:
* Tribute to the Legends, a 2 part series of acclaimed artists paying tribute to South African musical icons including the late Bheki Mseleku, Mariam Makeba  and many others, with:
**Part 1: A double bill concert with Nduduzo Makhathini and Thandiswa Mazwai on Friday 2 October, 8-9pm.
**Part 2: South African iconic jazzman Khaya Mahlangu (on Sax) and his big band on    Sunday 11 October,  4 – 5pm.
* Urban Clash Bands, featuring a diverse and exciting selection of hip and original bands  including pop, blues, rock, afropop  to indi sounds on Friday 16 October, 8-9.30pm.

* Going Back to the Truth of Space, a special collaboration with SA's leading ballerina Kitty Phetla and internationally acclaimed pianist Nduduzo Makhathini  in concert. On  Sunday 18 October, 4-5pm.
* Global Dance Supreme, a major urban dance project involving dance groups across South Africa and beyond. #GDS2020 includes workshops and dance championship competitions. (Various dates throughout September and October, culminating in the Intercontinental Online Championships on 26-29 November)
* Film Makers Platform, a digital conversation on funding, digital platforms and various other pertinent issues affecting film makers. On 16-19 October.
* Current Affairs Virtual Theatre Festival, a festival featuring ten one hander productions put together by Alex Arts Academy, seeking to provide a space for young people to tell their Covid 19 stories and how the pandemic affected their personal lives and their families. On 23-25 October.

The festival will be launching a series of competitions and great giveaways for festival fans who have been actively and enthusiastically engaging with the programme. More information is available on to all #ArtsAlive online platforms.

More in this category: « Rhythm City's Latest Addition - Bohlokwa Mpiti as Zak Lukhele. Rhythm City and Scandal! Two weddings and a destination. »
back to top