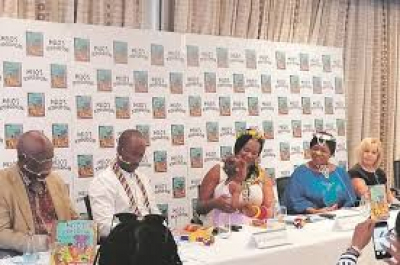 Enthusiastically attended by socialites such as Jacaranda FM’s Elana Afrika-Badenhorst – who facilitated the panel discussion – and singer, Yvonne Chaka Chaka, the launch-cum-press conference assumed a homely and familial ambience, with the presence of the only child in the room, and person whose name lends itself to the title, namely, Melokuhle, being acknowledged with rapturous applause by the adult majority.

Co-written with her daughter, Wenzile, as well as her son-in-law, Khulekile Msimanga and his father,Zedekiah Msimanga, the colourful 136-page hardcover tome is, in the advocate’s words, a dream come true, inspired by her first grandchild, Melokuhle. The idea for the book embracing values such as integrity, truth, courage, compassion, patience, respect and resilience at its centre came to her while watching a film titled, Christopher Robin, whilst on a flight from London.

Extrapolated the former Evelyn Baring High School (at ESwatini) pupil, “for many years I wanted to extend to today’s little ones the joy of the African fables and proverbs that were part of our staple diet when we were growing up. It was only much later, as a grown-up, that I realized that storytelling was how ancient societies passed down wisdom, knowledge and values. Fables and proverbs played an important part in shaping our worldview and characters. It is through the fables and proverbs we grew up hearing that we learned and internalized values such as integrity, truth, courage, compassion patience, respect and resilience.”

Offering the background to the visibly labour of love, Madonsela ventured, “Our little princess, Melokuhle or “Melo”, my first biological grandchild, had just arrived with much fanfare. My first gift to her was a giant elephant that her mother, my daughter Wenzile, promptly named Nzinga. Incidentally Princess Nzinga had been Wenzile’s nickname since she was a baby.”

Continuing, the world renown figure described by superlatives by Sua du Plessis, an executive of the book’s publisher, Christian Art Publishers, added, “The royal heritage I had in mind was celestial royalty that every child has a claim to. But some children are not aware that they are divine princesses and princes hence they settle for a diminished significance in life that others assign them. The big idea was for Nzinga to guide Princess Melo to discover who she is and rise to the occasion having acquired wisdom, the right values and knowledge, through fables and proverbs.”

“Like the fables and proverbs we grew up with, the stories in Melo’s Kingdom are character-building. Buried in these stories are pearls of wisdom, principles for living a life well-lived and images that transport the reader or listener to enchanting worlds far away. It is my hope that the stories will bring back story time where families read and tell stories while sitting together,” expressed little Melo’s grandmother whilst the little one, dressed in a light pink princess dress, had the freedom of space around the panel discussion – all the while oblivious to the on goings in her name!

“Fables and proverbs played an important part in shaping our worldview and characters. It is through the fables and proverbs we grew up hearing that we learned and internalized values such as integrity, truth, courage, compassion patience, respect and resilience. “Once upon a time” was a familiar start to our post dinner storytelling escapades at my house when we were growing up.

This was particularly the case during the days when we were growing up under my grandmother’s care. I cannot recall a fonder memory of my childhood days than story time. It did not matter whether the stories were told at home, church or school. We eagerly looked forward to it as we did our chores during the day. I can still remember as if it was yesterday. Wide-eyed we sat in anticipation around the fire in my grandmother’s rondavel,” Madonsela reminisced adding, “We got to learn about the magnificent variety of animals that roam the African continent.”

Advising, Madonsela pointed out, “Instilling a love of reading at an early age gives a child an edge on so many levels. We need to instil a moral compass in children; Melo’s Kingdom also aims to help establish that in a delightful way. As a team, we hope Melo and other little kids will find friends they can relate to among the characters, and wisdom to navigate life joyfully.”

Melo’s Kingdom takes children on a wonderful adventure to the African bush with Melo and her special animal friends. Each of the charming stories explores an African proverb and incorporates biblical principles to inspire and educate children in an engaging way. The stories written by Thuli Madonsela and members of her family, highlight the importance of values like honesty, courage, respect, teamwork and kindness, while exploring the wonders of creation. The message of each story is reinforced by a relevant Scripture verse, a prayer, quizzy questions for further reflection,wise words, and a fun, faith-filled activity.

Fellow contributors in the colourfully-illustrated book intended for children between the ages, 5 – 8, Wenzile Madonsela Msimanga (Melokuhle’s mother and a childhood development enthusiast), Khulekile Msimanga (Wenzile’s husband and a Chartered Accountant who uses numbers to tell stories) and Zedekiah Msimanga (Khulekile’s father and a retired university lecturer who grew up as a third born in a family of ten children) all combined their imagination and skills to bring joy, happiness and wisdom to young ones worldwide!

Melo’s Kingdom is published and distributed by Christian Art Publishers and is now available in bookstores around the country at a price of, R199.00.