The Braai Show With AKA Moves To Exploit The Value Of Traditional Television. 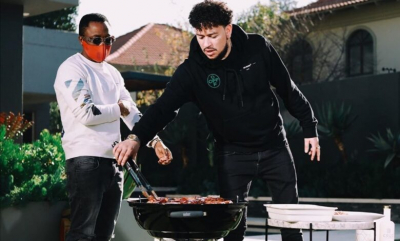 In an age of the Fourth Industrial Revolution, the world is shifting in how it consumes content. Traditional media, most notably newspapers and books, are making way for online options – from e-novels and online newspapers to apps, streaming, Netflix and more. Yet, when presented with a concept that began on an online platform, four executive producers immediately understood its value for mainstream media as well.

The Braai Show with AKA, which launched on the rapper's online subscription-based TV platform in June this year, is a case in point. While, entertaining and fun, it was only accessible to subscribers of AKA TV.

Acknowledging it's potential for so much more, executive producers David Phume, Legend Manqele, Rich Mahog and Kenny Makhudu – have collaborated on an SABC1 offering that is set to reach millions more viewers and therefore have a lot more impact.

Aware that SABC1 is South Africa's largest television channel – that reaches a vast and young audience – Phume, media and tech entrepreneur at Cake Media, saw the TV channel as the perfect vehicle from which to bring engaging, entertaining content to people throughout South Africa.

"While this show was originally produced for the AKA TV app, it has been repackaged to compete in prime time television on SABC1 which attracts millions of eyeballs," said Phume.

Phume identified AKA's attraction among the majority of viewers of SABC1 and thought what better way to catch up with people than over a succulent steak at a typically South African event – a braai. From Minister of Transport Fikile Mbalula to award-winning artist DJ Tira, AKA will be hosting well-known personalities in 13 episodes on national TV.

Known himself for making headlines for all the wrong reasons, AKA has a huge following in South Africa. While some see him as a voice for the youth, others hail his immense talent. Love him or hate him, AKA remains one of the most-talked-about personality in South Africa. So when you bring him and other influential and/or controversial characters around a good old braai stand, conversation is bound to make for interesting viewing.

"We are expecting the show to peak from episode four and five as some 'unexpected guests' make their appearance on the show," says Phume.