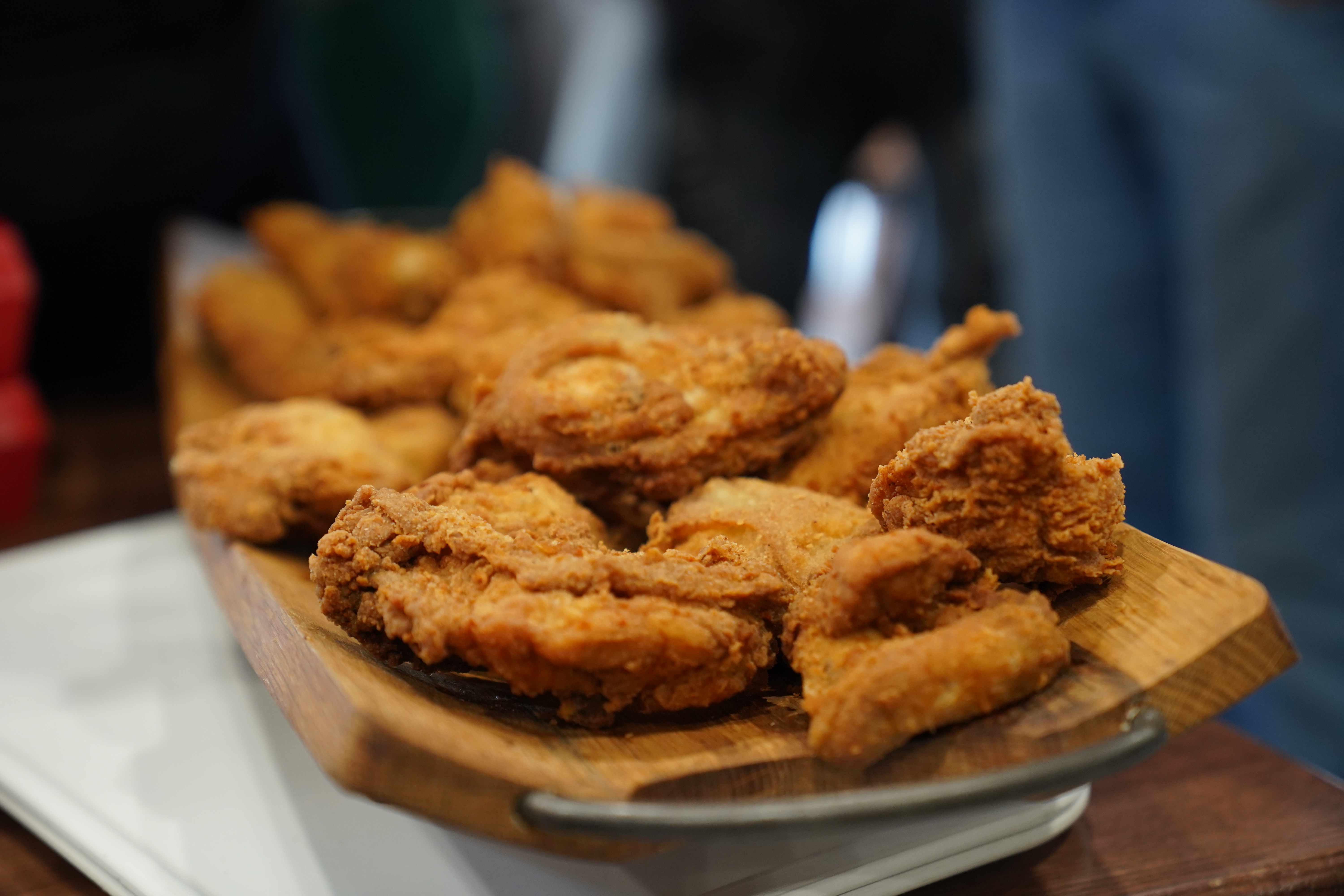 “Time, time, time!” or “Hot, hot, hot!” are alternate directives repetitive on a daily basis on Gladness Malatji’s lexicon set as she commands the back-of-house and front-of-house spaces inside any Kentucky Fried Chicken restaurant.  After some eight years as an area coach of the brand’s mostly Gauteng located eateries – she’s earned the right to carry herself like a colonel!

On a Wednesday morning at the KFC Meadowpoint, Meadowlands branch, Malatji would become the focal point in seeing to it that a behind-the-scenes tour of the Soweto restaurant’s kitchen arranged for members of the Fourth Estate to experience first-hand how KFC prepares its Original Recipe chicken every day – went according to plan!

Before separate groups of newsgatherers would venture into the kitchen to be shown and even partake in how the 1939-established brand’s delicious Finger Lickin’ Good chicken is made, we had been warmly welcomed with smiles and hugs by staff and the buzzing team of young ladies from publicity agency, Edelman – and who, upon registering our attendance promptly took our orders for welcoming hot beverages of steaming coffee and cappuccinos!

Once invitees had gathered, KFC Public Affairs Director for Africa, Zinhle Modiselle formally welcomed us and whetted our appetites regarding the exciting experience we were shortly about to embark on. “These guys and these stores do the most phenomenal job of preparing the food that you love!” she acknowledged, continuing, “I was surprised by how much freshness, how much quality, like it’s an obsession – and you guys are gonna experience that first hand!”

“Let’s go cook some chicken!” Modiselle concluded and as if on cue, staff members emerged from the kitchen door singing an improvised song in unison to meet with the now excitable media corps.  Malatji then commenced to address the first group of visitors on standard procedures around the back-of-house focussing mainly on hygiene.

Having been issued with headwear and nose and mouth masks, we were then ushered to the all-important point-of-call, namely the basin where we had to wash hands (for a statutory 20 seconds), scrub nails and sanitize.  Hereat, Malatji emphasized that if after the

initial wash, one happened to touch their nose – they would then be obliged to re-wash.

Purposefully following her, the mentor then directed the tour to the very first location in the back-of-house layout, the inventory receiving area.  The walk-in freezer, where the temperature has to be maintained below 12 degrees, then followed.  With explanations of machine functions and inevitable questions from the followers being the order of the moment, we were constantly getting in the way of staff shuttling to-and-fro the different preparation stations, leaving some of them to constantly bellow out, “hot, hot, hot!”, polite kitchen speak for: move out of the way.

Somehow managing to accommodate each other, Malatji continued on, on her tutorials, demonstrating the distinction betwixt blood and non-blood chillers – entailing the separation of raw chicken from food items such as salads, cheese, soft drinks, et cetera!

She finally gathered us around the main area of operations, namely the breading area where a time conscious process entails the washing of chicken pieces by ‘heads’ (with 2 heads representing the equivalent of 18 pieces, for instance), dunking the flesh in a deep rectangular tub containing a mixture of KFC wheat flour, a milk and egg mix, OR (original) seasoning and breading salt.  Hereat, the next action in sequential order was about methodically laying the pieces on trays which were due for the fryer.  Malatji pointed out that drumsticks had to be breaded twice to avoid instances of being ‘blow’ (where a portion wouldn’t come out of the fryer still firm).

Given that the whole exercise was for the media to experience what goes on in the cooking process on a daily basis, at that point, the area coach invited a volunteer to helm the breading process – a challenge Caxton Media’s editor, Mzwandile Khathi accepted with relish.  Looking like a surgeon in an operating theatre with his arms raised in the hold-up pose, a member of the regular staff put an apron upon his person and it was game on!  Under very close scrutiny with every portion that he subjected to the breading and onto how he laid the chicken onto the frying trays – the consensus was that he passed the test, although Malatji kept on nudging him regarding the “time, time, time” imperativeness.

Crucially, whilst the breading commenced, the pressure cookers’ oil (vegetable) had to be at a ready temperature at all time to receive

intakes of breaded heads.  Depending on quantity, two heads (the equivalent of two full chickens) had to fry for 14 minutes.  The sequence: all of an hour 30 minutes from breading to fryer to warmer – with 15 seconds factored in to drain the oil and a further five minutes in warmer to drain.  Within all these technical aspects, a control point featuring time and temperature (at 70 degrees centigrade) equilibrium have to be maintained.  And before the cooked product could be moved to the front-of-house, a ‘doneness test’ gets performed to ascertain the brownness of the thigh bone marrow and that there is no vestige of blood on the portion.  The portion passing that – implies that it would be ready to be served!

Having seen Khathi’s effort passing the test and safe inside the warmer ready for serving per order, it was now time to part ways with Malatji and her staff and in order to make way for another group of colleagues to undertake the kitchen tour.

In the main restaurant dining area, with tables tastefully adorned with fresh bouquets of humongous Proteas, principal operator, Steve Ford awaited us with friendly ambience.  Responsible for operations encompassing the area coaches and training, inter alia, Ford unpacked his obligations to the brand as seeing to the mentoring and growth of employees.  His eyes lighting up when he mentioned that the eatery could get hectic to the extent of a thousand customers filing through its doors on any given day, he also broke down the pointers of what made the brand so profitable amongst its locations’ demographic.  Ford also let in on around the corner openings of additional branches in other Soweto areas such as Pimville.

Then arrived the ultimately fun part of indulging in our hosts hospitality, viz, the feeding part as trays of Breakie Crunch Wraps were passed around a space – although not off-limits to regular customers – which for some two hours appeared to be exclusive for the newshounds. More trays laden with regular and hot & crispy chicken pieces were brought in for the guests’ consumption.

Ever the curious gourmand, I enquired from Ford as to which unfamiliar edition on the menu I could sample, and he suggested the Smokie Dunked Burger – a limited edition (available for six weeks only) creation by KFC’s South African development team.  Whilst other visitors had their usual pieces of chicken with pap and gravy – I eagerly tucked into my order composed of hot & crispy chicken fillet, tomato, lettuce, cheese, KFC mayo and smoky barbeque sauce!

Tweet
More in this category: « The Ndlovu Youth Choir has secured a new music deal with Simon Cowell's company, Syco, and Sony Music. Gold Reef City rolls out the red carpet for a mesmerising musical feast. »
back to top