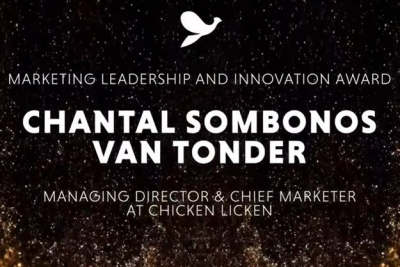 The award was introduced by the Loeries in 2007, to recognise an individual for their marketing achievements over a sustained period of time. Previous winners have included Andrea Quaye, former Vice President of Marketing at Anheuser-Busch InBev; Doug Place, Chief Marketing Officer at Nandos; Claudia Waters, Marketing Communications Manager at Mercedes Benz and Yegs Ramiah, former Chief Executive of Brand at Sanlam.

"Chantal's leadership has seen Chicken Licken win numerous Loerie Awards over the recent years culminating in Chicken Licken becoming the number one ranked brand in the Loeries 2019 rankings. Chantal's support of her agency is a testament to how effective brand and agency partnerships can create innovative experiences for society," says Preetesh Sewraj, CEO of the Loeries.

An elated Sombonos-Van Tonder says, "It's a huge honour for me on behalf of my creative team and Chicken Licken family, but also on a personal level it's a huge affirmation of the work I am doing in continuing my father's legacy of tenacity, hard work whilst chartering new territories for the brand."

Sombonos-Van Tonder, who eats Chicken Licken daily, is exceptionally passionate about the brand founded by her father in 1981 and attributes her business success to the partnership with creative agency Joe Public and her supportive husband and family. "The success of our brand is a balance between our agency's outstanding creativity and my instincts for knowing what is best for the brand which has been part of my life since primary school," she says.

Sharing her father's firm belief in the power of creativity to move the business forward has already yielded exceptional results, despite the tough economic climate. Even with its doors closed during the COVID-19 lockdown, and while other brands struggled to strike the right tone, Sombonos-Van Tonder ensured that Chicken Licken nimbly adapted its advertising to delight its audience thereby sustaining fans' ardent brand love.

Since taking over the helm, Sombonos-Van Tonder has collected a series of accolades - a total of 49 Loeries including a Grand Prix, eleven Gold awards and both the coveted 'Brand of the Year' and 'Brand Representative of the Year' awards for 2019.

As one of a few women in leadership, the mum of two boys, a teenager and toddler, highlights that, "Women can achieve the same success and, with determination and support, can balance both career and family."

Sombonos-Van Tonder holds a Bachelor of Scientific Economics from the University of Stellenbosch and has been at the helm of the business for nearly two decades. "Chicken Licken is my life and I am as passionate about it as my father. He once told me that if you believe in something you should be willing to die for it."

With 247 franchisees across South Africa and in Botswana, Sombonos-Van Tonder hopes to continue to innovate with its creative communication with the aim of delivering a soulful and affordable experience to their customers.

Here's a list of all the winners from today:

Twitter
More in this category: « e.tv responds to inaccurate reports of Hungani Ndlovu (Romeo)’s temporary leave from Scandal. e.tv’s Rhythm City comes to an end. »
back to top