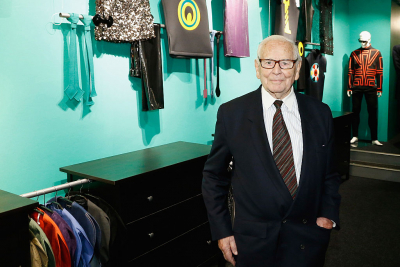 Legendary French fashion designer Pierre Cardin died Tuesday at the age of 98 at a hospital in Neuilly in western Paris, his family told AFP.

Cardin was born in Italy in 1922 but emigrated to France as a small child.

Cutting his teeth working at top couture houses such as Christian Dior, Cardin went on to launch his own brand and pioneered the use of licensing in fashion, plastering his label’s name on products of all kinds. His savvy business sense brought him a mix of admiration but also scorn from fashion purists at the time.

In the 1960s and '70s he upended traditional fashion with his futuristic, avant-garde looks. He became known for his visionary creations, shaking up fashion with bubble dresses and geometrical designs. Cardin was also one of the first to bring high fashion to the masses by selling collections in department stores beginning in the late 1950s.

While he no longer presented runway collections in his later years, Cardin remained active in the industry, attending parties and events and taking young designers under his wing.

He had previously been a mentor to prominent designers such as Jean Paul Gaultier.

His death was also announced by France's Academy of Fine Arts on Twitter.

"It is with great sadness that the members of the Academy of Fine Arts announce the death of their fellow member Pierre Cardin," the academy tweeted.

Meanwhile his detractors accused him of destroying the value of his brand and the notion of luxury in general. But he seemed largely unaffected by criticism.

"I had a sense for marketing my name," Cardin told Germany's Sueddeutsche Zeitung newspaper in 2007. "Does money spoil one's ideas? I don't dream of money after all, but while I'm dreaming, I'm making money. It's never been about the money." Born near Venice on July 2, 1922, to French parents of Italian descent, Cardin was educated in the not-so-glamorous French city of Saint Etienne.

He went to work for a tailor in nearby Vichy at age 17 and dreamt for a time of becoming an actor, doing some work on the stage as well as modelling and dancing professionally.

When he came to Paris in 1945, he made theatrical masks and costumes for Jean Cocteau's film, “Beauty and the Beast”, and a year later joined the then-unknown Christian Dior. His first big commercial venture, when he teamed up with the Printemps department store in the late 1950s, led to him being briefly expelled from the rarefied guild of French fashion designers, the Chambre Syndicale de la Couture. Couturiers in that club were forbidden at that time to show outside their Paris salons, let alone in department stores.

He also blazed a trail outside France long before other fashion multinationals in search of new markets. He presented a collection in Communist China in 1979 when it was still largely closed to the outside world. And just two years after the Berlin Wall came down, in 1991, a Cardin fashion show on Moscow's Red Square attracted a crowd of 200,000.

Cardin also expanded into new businesses, buying fabled Paris restaurant Maxim's in the 1980s and opening replica outlets around the world. He leveraged the investment further by launching Minim's, a chain of fancy fast-food joints that reproduced the Belle Époque décor of the original exclusive Paris eatery.

His empire embraces perfumes, foods, industrial design, real estate, entertainment and even fresh flowers. True to his taste for futuristic designs, Cardin also owns the Palais des Bulles, or Bubble Palace, a residence-cum-events-venue woven into the cliffs on one of the most exclusive strips of the French riviera.

More in this category: « Joburg Theatre Cancels the Festival of Lights Event Due to The Covid-19 Second Wave Restrictions. SA mourns the death of theatre legend & 'Skeem Saam' actor Mahuma Paul Rapetsoa. »
back to top