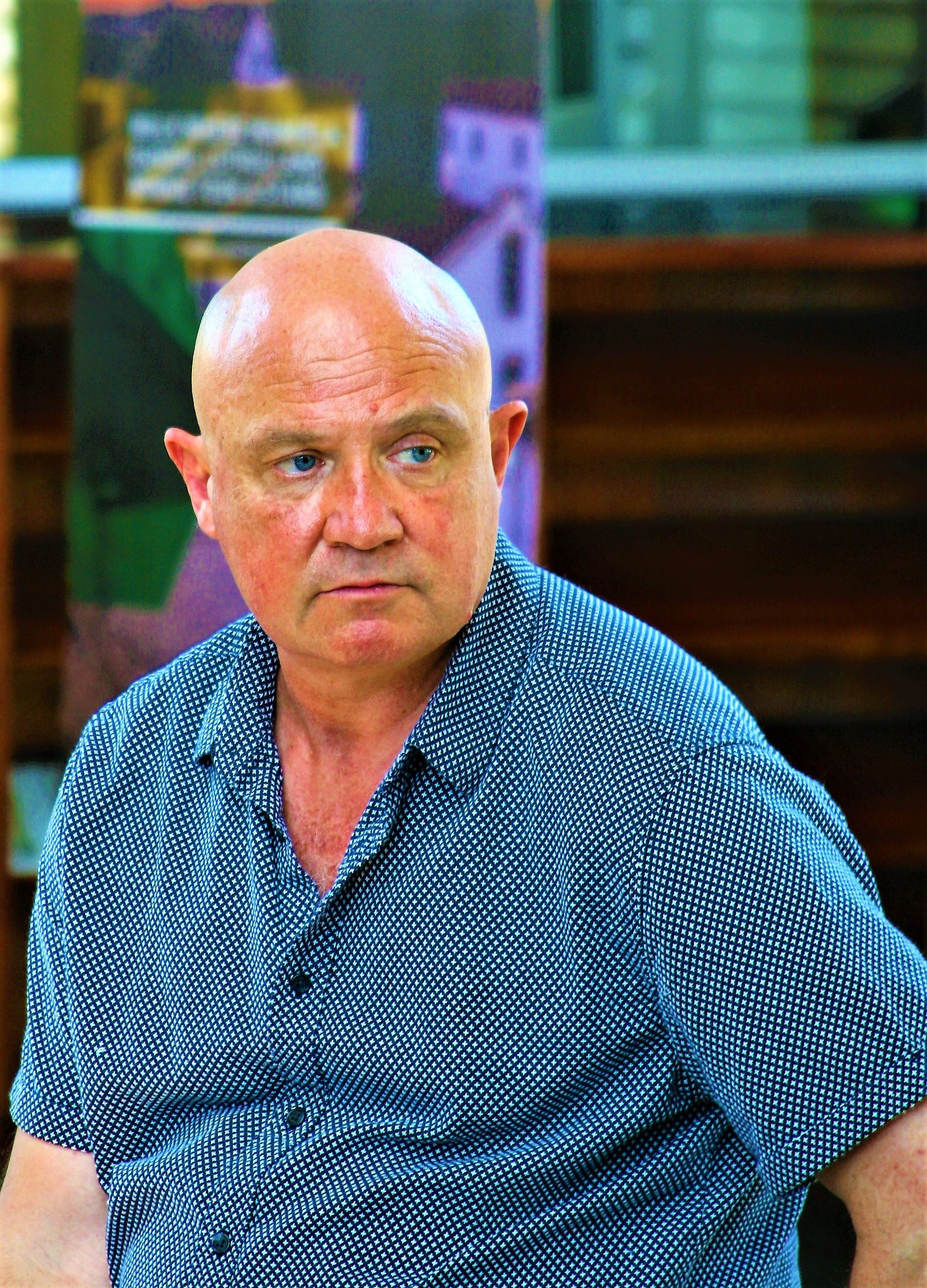 It all happened in slow motion as a scene the converse of a tableau comprising mountains populated by a pine forest and located south of the Lasva Valley in Bosnia and Herzegovina, unfolded.  On an isolated mountain road, an old, severely underpowered British armoured military Shorland, a leftover from the Troubles of Northern Ireland, was losing a battle against gravity on a steep incline.  The vehicle had been struggling to drive all the way up the road and after repeated laborious U-turns, was on its third attempt when, from out of nowhere in particular, a man dressed only in Speedos and holding an RPG launcher stepped into its path!  Sans further ado and equally sans provocation, the man fired the RPG at it, with the explosive sailing across the windscreen and into the pine forest beyond.  The terrible miss induced laughter on the person of the aggressor, who then disappeared as sudden as he had emerged - into the thick woods alongside the road.  The just escaped death occupants of the Shorland were photojournalists, Patrick Chauvel and Gilles Peress – who were in the region to cover the disintegration of Yugoslavia.  Relating the senseless incident to fellow photographers - amongst them South African, Greg Marinovich – the seasoned lens men were especially annoyed that the guy had disrespected them by trying to kill them whilst just wearing swimming trunks.

The above recollection is but one of numerous stories comprising Pulitzer Prize-winning photojournalist, Greg Marinovich’s recent offering titled: Shots from the Edge.  In the tome, the author recounts his experiences in war and conflict hotspots stretching from Africa and the world, and recalls encounters with rebels, child soldiers, illegal immigrants, militia members, peace-keepers, aid workers, genocide survivors and orphans, each with a remarkable story to tell.

The book’s publishers, Penguin Books, goes on to summarize Marinovich’s efforts as documenting more than two decades’ worth of turbulent history and reveals the human side of the conflicts.  Some of the moments are deeply moving and profound: others so surreal as to blur into insanity.  Covering South Africa, Angola, Mozambique, Somalia, Rwanda, Uganda, Sierra Leone, Bosnia, Chechenya, India, Saudi Arabia, Palestine and Trump’s America, the book exposes the reader to extraordinary people, places and experiences.

The accounts in Shots from the Edge are insightful, tragic, shocking and occasionally humorous, but above all, they are a poignant reminder of the brutality and indignity of war, and of people’s resilience under the most hostile circumstances.

The Greg Marinovich I know 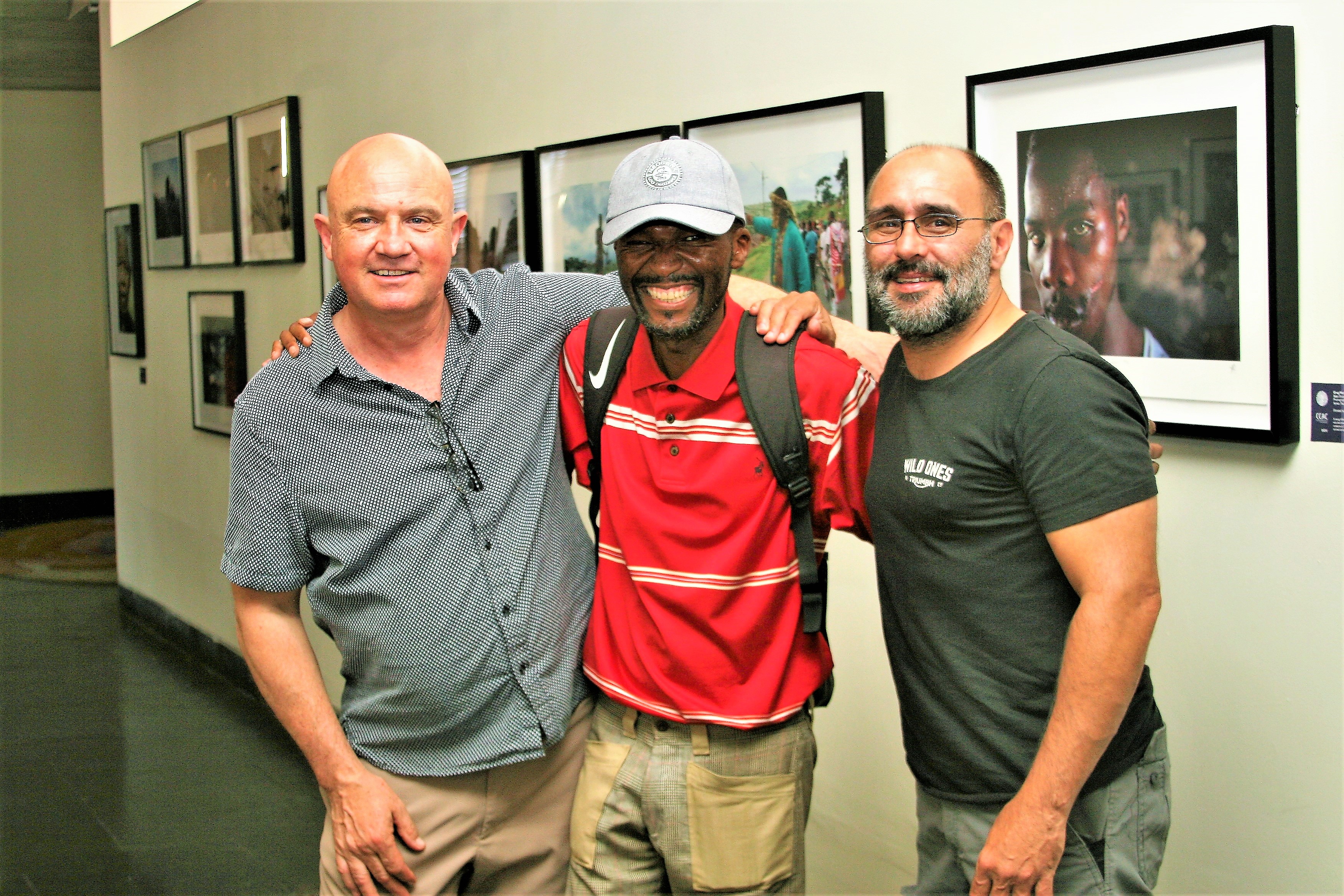 Volunteering to the folk at Penguin Books to review Shots from the Edge was as opportune a moment as any for me to stretch journalistic liberties by augmenting Marinovich’s career achievements through also weighing in on our photojournalist-to-photojournalist acquaintanceship.

Whilst aspiring to become a journalist back in the 90’s of South Africa’s turbulent transition to democracy, I recall coming across a newspaper reportage on tribal related killings at Soweto’s Nancefield hostel.  Horrified by the raw, graphic and brutal images splashed onto its pages, the location of the barbarity also held curiosity for me since they happened just across the railway line from my abode.  Unbeknownst to me - until much later when I came across what Marinovich was quoted on in his previous offering, viz, The Bang Bang Club - one of the unfortunate incidents, dated 17 September 1990, was to form the basis of Marinovich’s emergence into the league of the war photographer.

As destiny would have it, some three years on after the hostel marker, I would, fresh out of photojournalism training on a UNESCO programme, now be situated into his realm when one of his cherished crew, Ken Oosterbroek, roped me in on an internship with The Star newspaper’s photographic department – just over a month before the epoch-making democratic elections of 1994.

It wasn’t until we had duly settled into the new South Africa that I came across Marinovich huddled with others around The Star picture editor, Robin Comley’s desk whilst reviewing some video footage of the moment Oosterbroek succumbed from ‘friendly-fire’ from panicked members of Brigadier Gabriel Ramushwana’s National Peace-Keeping Force.  There in the first instance to deliver editorial imagery, the motion pictures were so compelling enough to draw me in amongst the huddled group and my curiosity was in the nick of time to witness Greg exclaim excitedly at the moment on the footage when the viewer can clearly see the force of a bullet from a panic-stricken soldier’s skyward-facing rifle part the front hair of American photographer, James Nachtwey. In the same incident which played out in Thokoza on the East Rand, on 18 April 1994, Marinovich – who once garnered the reputation of being a ‘bullet magnet’ amongst the photojournalistic community – was also struck in the chest.  A famous image from that moment depicted him seated on the ground whilst clutching at his wound and grimacing with pain.

For a white South African, Marinovich has also fascinated me through his natural and genuine affinity for black counterparts – with him befriending a family from Meadowlands pending the transition.

Since much came and went with ensuing time and he’s been based in the United States of late, I got to re-acquaint with the Springs native on Constitution Hill on Human Rights Day – on the occasion of the opening of his exhibition, The Dead Zone, which currently forms part of the Constitutional Court’s permanent collection.  Also in attendance, was the only remaining member of the famed Bang Bang Club, Joao Silva, as well as a man with a prosthetic arm – a once prominent member of the resistance in the drawn-out battles betwixt hostel dwellers and township residents.  The man, Jerry Marobyane, had lost a hand from a grenade blast and his presence served as a pointer of the calibre of acquaintances Marinovich has made in the course of his decorated career.

To an October 2017 question from the London School of Photography regarding how he got into photography, here’s Marinovich’s response: Really through politics – I was trying to tell how apartheid affected lives in black areas like locations and the Bantustans, and I realized I need images.  And then a terrible/great thing happened: my 35mm was stolen and it was insured, so a friend of a friend took me and my insurance money to a second-hand camera store and essentially forced me to buy a large format Linhof Technika, a Mamiya 67 and a replacement Nikon 35mm.  In having to learn photography to actually shoot on the large format, I learned what photography was and fell in love …

Greg Marinovich is a Pulitzer Prize-winning photojournalist, filmmaker and author.  He was a member of the Bang-Bang Club, and co-author of The Bang-Bang Club: Snapshots of a Hidden War, about South Africa’s transition to democracy.  His most recent book, Murder at Small Koppie: The Truth Behind the Marikana Massacre, won the 2017 Alan Paton Award.  He has spent 25 years covering conflict around the globe, his writing and photographs appearing in magazines and newspapers worldwide.  Marinovich was editor-in-chief of the Twenty Ten project, tutoring and managing over 100 African journalists’ work in all forms of media.  He was a Nieman Fellow at Harvard University in 2013/14 and teaches visual journalism at Boston University’s journalism school and at Harvard University.

For more information, contact Surita Joubert at sjoubert@penguinrandomhouse.co.za I 021 460 5462 or visit www.penguinbooks.co.za.

Tweet
More in this category: « R. Kelly denied bail in sex-abuse case, trial date set for 2020. Nasty C and Prince Kaybee nominated for best African Act at the 2019 MTV EMAs. »
back to top