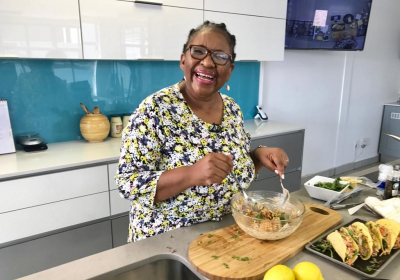 Apart from being a chef, Sithole was a writer, former editor of True Love, food stylist, recipe developer, a trained Cordon Bleu chef and an author.

At this stage, further details about Sithole’s death remains unclear.

We would like to extend our condolences on the passing of the seasoned chef, Mama #DorahSitole. Thank you for shining the culinary spotlight on the flavours of Africa. #RIPDorahSitole [Pic: @NBPublishers] pic.twitter.com/XyeZlBLDEC

Sithole, who had more than 40 years' experience in the food industry, made a name for herself as the country’s first black food writer.

She travelled to at least 19 countries on the African continent.

It is during her travels that she would familiarise herself with recipes from the foot to the horn of Africa.

Hence she captured her culinary travels in her 1 999 book Cooking from Cape to Cairo.

More in this category: « Music icon Kori Moraba succumbs to Covid-19. Local highlights now on Showmax, from Moffie to four Africa Movie Academy Award winners from SA. »
back to top