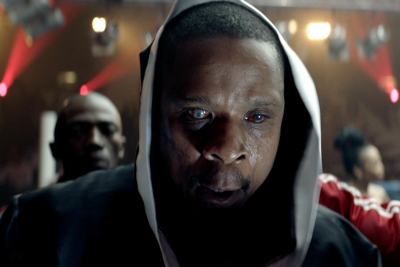 Currently on the longlist for the Golden Globe's Foreign Film category, Moffie won the Film Critics Special Jury Prize at the 2020 Dublin International Film Festival and has a 100% critics rating from Rotten Tomatoes, with Variety raving, "South African auteur Oliver Hermanus makes his masterpiece with this brutal but radiant story of young gay desire on the Angolan war front... establishing him quite plainly as South Africa's most vital contemporary filmmaker... Both a shiver-delicate exploration of unspoken desire and a scarringly brilliant anatomy of white South African masculinity. It fair takes your breath away."

Adapted from an autobiographical 2006 novel by André Carl van der Merwe, Moffie is set in South Africa, 1981, with the white minority government embroiled in a conflict on the southern Angolan border. Like all white boys over the age of 16, Nicholas Van der Swart (Kai Luke Brummer) must complete two years of compulsory military service to defend the Apartheid regime. The threat of communism and die swart gevaar is at an all-time high. But that's not the only danger Nicholas faces. He must survive the brutality of the army – something that becomes even more difficult when a connection is sparked between him and a fellow recruit.

In this new adaptation of Dalene Matthee's beloved novel, a coloured woman living in the arid Karoo takes in a lost white child and raises him as her own. Nine years later, the boy is removed and forced to live in the Knysna Forest with a family of woodcutters who claim he is theirs.

Separated by law and geography, Fiela and Benjamin spend the next decade trying to find each other while simultaneously coming to terms with their individual identities. Fiela has lost a son and slowly descends into depression, a state of mind that is further exasperated by the abuse that she experiences from both law and Benjamin's new father as she tries to find him. Benjamin, on the other hand, is thrust into an abusive and impoverished environment, one where he is forced to take on a new identity while suppressing the one he has.

He's the first voice you hear in The Lion King, a highlight of Hans Zimmer's Oscar-winning soundtrack. He's a Grammy winner, a Tony nominee, and the executive producer of the opening and closing ceremonies of the 2010 FIFA World Cup. His songs have been streamed over 250 million times on Spotify alone, and he won the 2020 DStv Mzansi Viewer's Choice 1Life Legend Award.

Now, the Soweto-born legend is back in South Africa with his latest production: the hit Showmax Original reality series Lebo M - Coming Home, now available to binge in full. The 10-part series promises fans a front-row seat to his career, but it also turns the spotlight onto his biggest dream: bringing his family together.

Noughts + Crosses was named one of "the 10 best British TV shows of 2020" by Mashable, who called it, "crucially important... a kind of drama/thriller/romance hybrid, mixing Game of Thrones-style political backstabbing with a very human story of discrimination and systemic oppression. The end result? A stunningly-crafted epic that's every bit as tense as it is impactful."

South African Masali Baduza (Trackers) and BAFTA winner Jack Rowan (Born To Kill, Peaky Blinders) play Sephy and Callum, two star-crossed lovers in the tradition of Romeo and Juliet, in an alternate universe where Africa colonised Europe, rather than the other way round. Based on Malorie Blackman's multi-award-winning novel and shot largely in Cape Town with Film Afrika, the series also stars South African actress Bonnie Mbuli (Invictus, Wallander) as Sephy's mom, Jasmine. Koby Adom - who is from Ghana, was born in Cote d'Ivoire, and grew up in London - is one of the two directors, while South African costume designer Dihantus Engelbrecht earned a Costume Design – Drama nomination from the 2020 Royal Television Society Awards in the UK for his work on the show.

Inspired by Thabo Mbeki's biography, A Dream Deferred, The Letter Reader tells the story of Siyabonga (Bahle Mashinini), a 12-year-old boy from Johannesburg who is sent to a village in KwaZulu-Natal to live with his grandmother while his parents are sorting out their marital problems. As a city boy who is not accustomed to doing household chores, Siyabonga struggles to adapt. He discovers the power of words as he reads letters that put a smile on people's faces, until one day, a letter with bad news lands in his hands... The late Andile Gumbi, best known for playing Simba in The Lion King musical, co-stars, while multiple-SAFTA winner Lance Gewer (Tsotsi, Happiness Is A Four-Letter Word) DoPs.

In South Africa's powerful 2020 Oscar entry, an ageing, womanising professional boxer (Mantsai) and his career-criminal brother (Thembekile Komani) take one last shot at success and get more than they've bargained for. Knuckle City is a rare South African film with a 100% critics rating on Rotten Tomatoes. "It is impossible not to be completely consumed by Knuckle City," wrote The Globe and Mail when the film premiered at Toronto International Film Festival, describing it as "Raging Bull meets Rocky, but in South Africa" and praising its navigation of "the painful issues of toxic masculinity, age and the impossible-seeming choices one can be forced to make to ensure the survival of themselves and the people they love... Mantsai's performance is gripping, electrifying and heart-breaking."

THE GHOST AND THE HOUSE OF TRUTH | Crime drama

On 20 December 2020, The Ghost and The House of Truth won Best Editing at the Africa Movie Academy Awards (AMAA). It had been the third most nominated film going into the awards, with seven nominations, including Best Film and Best Director (Akin Omotoso, who previously won the category for Vaya).

In The Ghost and The House of Truth, Bola Ogun (BAFTA Breakthrough Brit winner Susan Wokoma from Enola Holmes) is a dedicated counsellor who facilitates reconciliation sessions between convicts and the victims of their crimes. But when her own daughter goes missing, her belief in forgiveness is tested. Shot in Makoko, Nigeria, the award-winning crime drama also stars AMAA Best Actress winner Kate Henshaw (Chief Daddy, 4th Republic) as Folashade, a police inspector in the Child Protection Unit, and AMAA Best Young Actor winner Kemi Lala Akindoju (Dazzling Mirage, Banana Island Ghost, Fifty), who also co-produced.

More in this category: « South African food icon Dorah Sithole dies. Steve Harvey is back to host the second season of the iconic game show Family Feud SA. »
back to top