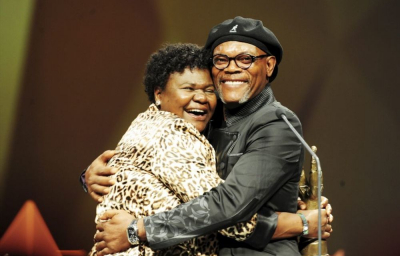 The multi-award winning actress Lindiwe Thembekani Ndlovu has passed away according to a statement released by her agency.

According to Higgins the actress died in her sleep this morning.

"It is with heavy hearts and unimaginable sadness that we bring you the news of Lindiwe Thembekani Ndlovu's passing in her home this morning 11th January," Higgins said in a written statement.

"To us Lindiwe was family but to many she was so much more.  An unsung incredible actress who will leave a huge space in the creative world of acting.  Her incredible passion, deep respect for her craft and unrivalled commitment to her career evident in every project she took on.

"Her career has been long and full of industry accolades and performances. By far her greatest achievement was receiving her SAFTA Award, which was presented to her by the incredible American actor Samuel L Jackson, which she received for Best Actress in a Feature film.

Ndlovu was best known for her sitcom roles as Qondi in Mazinyo Dot Q (2004) and as Malawian maid Buseje in Ses'Top La.

She also had starring role as Sponono, a hardened woman criminal who has spent 10 years in jail for murdering a man who tried to rape Gasta, in the Mzansi Magic soap opera Zabalaza.

Ndlovu was presented her SAFTA Best Actress in a feature film award by veteran US actor Samuel L. Jackson.