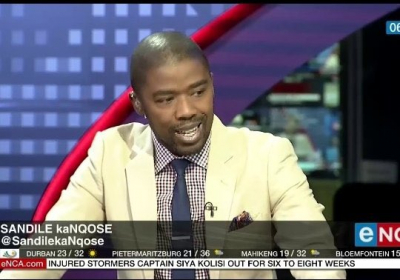 The passing of the talented presenter who is best known for anchoring sports on eNCA prime time news was announced by his colleague Nandi Tshabalala.

Taking to social media Nandi said: "Rest well, colleague, it was an honour."

Since then, messages of heartfelt condolences have been pouring in for the late sports anchor.

Robert Shivambu paid his tribute and said: "Wow it never ends, Sandile is gone just like that? We were good workmates at eNCA and used to joke about things and encouraged each other."

Also Abongile Klass reminisced on a time when he used to present the midday sports bulletin.

"I remember Sandile doing sports at 1 news with Duduzile Ramela, used to love them, condolences to his family and friends."

While Hlubi Radebe thanked him for making his evenings enjoyable. "Face all sports lovers know very well, rest in peace Sandile, thank you for making my evenings in front of the television enjoyable."

Former eNCA senior information anchor and present Newzroom Afrika anchor Xoli Mngambi tweeted: "This is devastating, a passionate and enthusiastic broadcaster is no more. Our on-air banter was always filled with fun and laughter. I cannot imagine the pain and heartache that his family is going through."

It is with great sadness that we share the news of the passing of former #eNCA and #eTV sports anchor Sandile ka Nqose. Nqose passed away today at the age of 42. #eNCA Courtesy #DStv403 pic.twitter.com/IGJQLJQ3Wp— eNCA (@eNCA) February 1, 2021

The channel described ka Nqose as a diehard sports activities fan and a person who had a love for broadcasting.

A die-hard sport fan, who had an insatiable passion for broadcasting, Nqose resumed his career at eNCA in 2008 as a freelancer before joining the channel on a permanent basis in 2009.

He also worked at Yfm, and as a sports anchor on eTV’s lunchtime news bulletin.

Among the many highlights during his time at eNCA, Nqose was part of the team that covered the Springboks' arrival and trophy tour after winning the 2019 World Cup.

He was also the first analyst on the eNCA Saturday and Sunday sport shows.

Mthethwa said the flame of Nqose’s candle burnt out too soon.

"He was a young man, whose colleagues describe as a consummate gentleman - always helpful, jovial and humorous.

"He will be remembered as a good soul, who was radiant and full of life, who delivered sport bulletins with the utmost professionalism, "said the Minister.

Tweet
More in this category: « Renowned and celebrated singer Sibongile Khumalo dies aged 63. In Rinél Day’s new music video she lives in a world where men stay at home. »
back to top