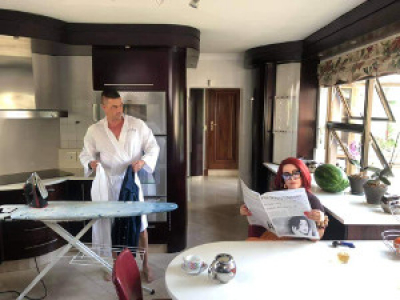 In modern life, it often happens that men and women have to change roles and for women to takes charge.

In Rinél Day’s new music video of her hit single, BREEK DIE MURE AF, which has just been released, she shows in a very light-hearted way that it is quite okay for us ladies to take the lead and that we, as hardworking females, are also entitled to our own fairy-tales.

"I think that the stress and drama of everyday life cause us, as women, to close our hearts to the idea of love and possible heartbreak... but we do not always realize how precious love can be. You can write your own fairy-tale even if you are a hardworking woman, "she explains about the concept behind her latest music video, which she describes as a "modern era video with a Vintage twist". "The idea was to show that hard-working women can also live a fairy-tale. Shooting this video challenged me to step out of my comfort zone and to get to know myself on a different level."

Rinél wanted to shift boundaries with this tongue-in-cheek video that was produced by Coolerbox Brothers. In the she takes the viewer into her world where men stay at home, take care of the household and even do the ironing!

"Chris da Silva made his beautiful home in Bedfordview available to us for the video! His house is definitely any woman’s dream home and was the perfect location for my modern fairy-tale,” she reveals. “We went to a lot of trouble to find the three perfect guys to play the lead roles and I am so happy that we were able to have John Owens (former Mr. SA), Phillip Hearn and Aubrey Pieterse on board. They are excellent in their respective roles and are also very nice to look at."

BREEK DIE MURE AF is an upbeat pop song – written by Werner Beukes, Johan Brummer (Fatman) and Marius Strydom – and follows in the footsteps of her previous single and music video, Ek Het Opgestaan, which achieved incredible success and topped the charts of several radio stations for many weeks.

Both songs were taken from her third studio album (Ek Het Opgestaan) that was released in 2020 and is described as one of her best releases up to date.

Being unique in an industry where there is a lot of competition has always been important to Rinél who was born in Vryheid and grew up in Richards Bay and Swartruggens. It is one of the main ingredients of the success she has achieved so far.

Her latest music video not only shows that she is willing to do what it takes to convey a striking message, but also strengthens her place in the hearts of music lovers across the country.

Twitter
More in this category: « ENCA sports presenter Sandile "KaNqose" Ngobese has died. Renowned virtuoso vocalist Dr Sibongile Khumalo to be laid to rest on Saturday. »
back to top