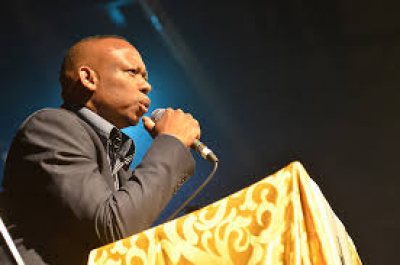 The Southern African Music Rights Organisation (SAMRO) has condemned action by Samro and Trompies member Eugene Mthethwa, who has chained himself to a table at their premises.

This after a video of Eugene staging a protest regarding money he believes Samro owes him went viral.

In the video, Eugene and singer and EFF member Ringo Madlingozi can be seen sitting at a table inside the Samro building as they demand their grievances be met.

As you can see Eugene has to make a stand, not for himself but for the rest of us as artists. We're here because Samro has been lying. They are not accounting to anyone so here we are.

"They know a lot of membership is black and people who are not privy to those rights, so they are capitalising on that," Ringo said.

Chained to a table, Eugene said: "We are here. They will see how they remove me. They have to answer the questions I've raised. The white CEO Mark Rosin, somebody who was exploiting artists, is the same person they've brought to come and get his pension funds from Samro.

"When our own members don't have pension funds, don't have anything."

Eugene said he had been a member of Samro for 30 years but his pension funds amounted to less than R300,000.

Samro CEO Mark Rosin confirmed Mthethwa had lodged a complaint regarding the calculation of his royalties and Samro had tried on many occasions, through many of its managers and board members, to amicably address his concerns.

.@SAMROMusic strongly rejects action by member as devoid of truth and lacking any merit. pic.twitter.com/26oQmQXLcL