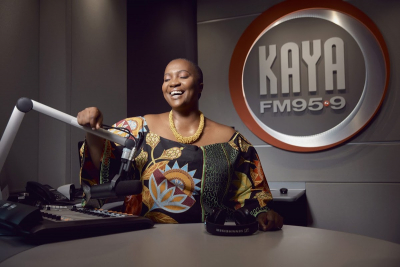 Dr Sindi van Zyl is bidding farewell to Kaya FM where she hosted Sidebar with Sindi from 2019.

When Dr Sindi returned to Twitter after a hiatus caused by ill health, it was a bittersweet moment for fans as she's bidding farewell to Kaya FM.

In a statement from Kaya FM, the station announced that this week would mark the end of the Kaya FM radio journey for Dr Sindi after she tendered her resignation to the station on Monday.

Dr Sindi will be taking time off to focus on her health.

This after the doctor announced on Twitter last month that she had been hospitalised. While she didn’t reveal details surrounding her hospitalisation or illness, Sindi hinted in a now-deleted tweet that she may have been suffering from a respiratory-related illness after shared photographs of herself strapped to a ventilator.

The doctor has since shared her healing progress on Twitter and thanked her doctors, family, friends and fans for their support.

Dr Sindi joined the station two years ago as the host of Sidebar with Sindi which aired Mondays to Thursdays between 7pm- 8pm. Her show explored multiple facets of health, family and relationships. The Dr also profiled some of SA’s brightest stars.

Meanwhile Khaya Sithole joined Kaya FM as a political analyst in 2017. Last year he became the host of On the Agenda with Khaya Sithole (Mondays, 20h00-21h00). His show provided listeners with quality reporting on current affairs and trusted expert analysis. Sithole will be joining Power FM.

More in this category: « Nasty C set to appear on the 'The Ellen DeGeneres Show'. Meghan accuses palace of 'perpetuating falsehoods - Oprah Interview. »
back to top