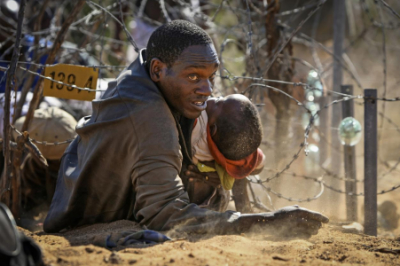 More than twelve years have passed since deadly xenophobic attacks swept unexpectedly through South Africa’s townships and informal settlements. The wave of violence left more than 60 people dead, hundreds injured and tens of thousands displaced from their homes and having to find refuge in makeshift refugee camps, community halls and police stations.

Now in 2021 - as Human Rights Day approaches on 21 March - xenophobia continues to rise. South African social media timelines are frequently punctuated with inflammatory language steeped in hatred. New episodes of violence are referred to as "cleaning" and refugees and migrants are called "cockroaches". This is translating into real life violence: migrants were attacked in Durban as recently as this month.

[BR]OTHER is a visual record of this violence over the past twelve years. The foreword, written by former Constitutional Court Judge Justice Edwin Cameron, is accompanied by critical texts by Achille Mbembe, Joao Silva, Justice Malala, Koketso Moeti and others. In documenting these events, the book aims to raise awareness of the dangers that lie in hatred, intolerance and indifference. It is an urgent call to action. We must not ignore the warning signs.

No African is a foreigner in Africa!

No African is a migrant in Africa!

Africa is where we all belong!’ - Professor Achille Mbembe.

James Oatway is an independent South African photographer. His work revolves mostly around themes of social inequality and people affected by conflict. He was the chief photographer and picture editor of the Sunday Times newspaper and is co-author of The Battle of Bangui (Penguin Random House, 2021). Oatway has received various international awards including multiple Pictures of the Year International (POYi) awards. In 2015 he was named the Vodacom South African Journalist of the Year. In 2018 his Red Ants project won the prestigious Visa d’or Feature Award at the Visa Pour l’image Photojournalism Festival in Perpignan, France.

Alon Skuy began work as a photographer for The Star, Saturday Star and the Sunday Independent, and later moved on to be chief photographer of The Times and Sunday Times. His work focuses on issues relating to inequality, resilience and conflict, and life on the fringes of society. Skuy is the recipient of numerous local and international awards, including a World Press Photo Award, and multiple awards from the Picture of the Year International (POYi).