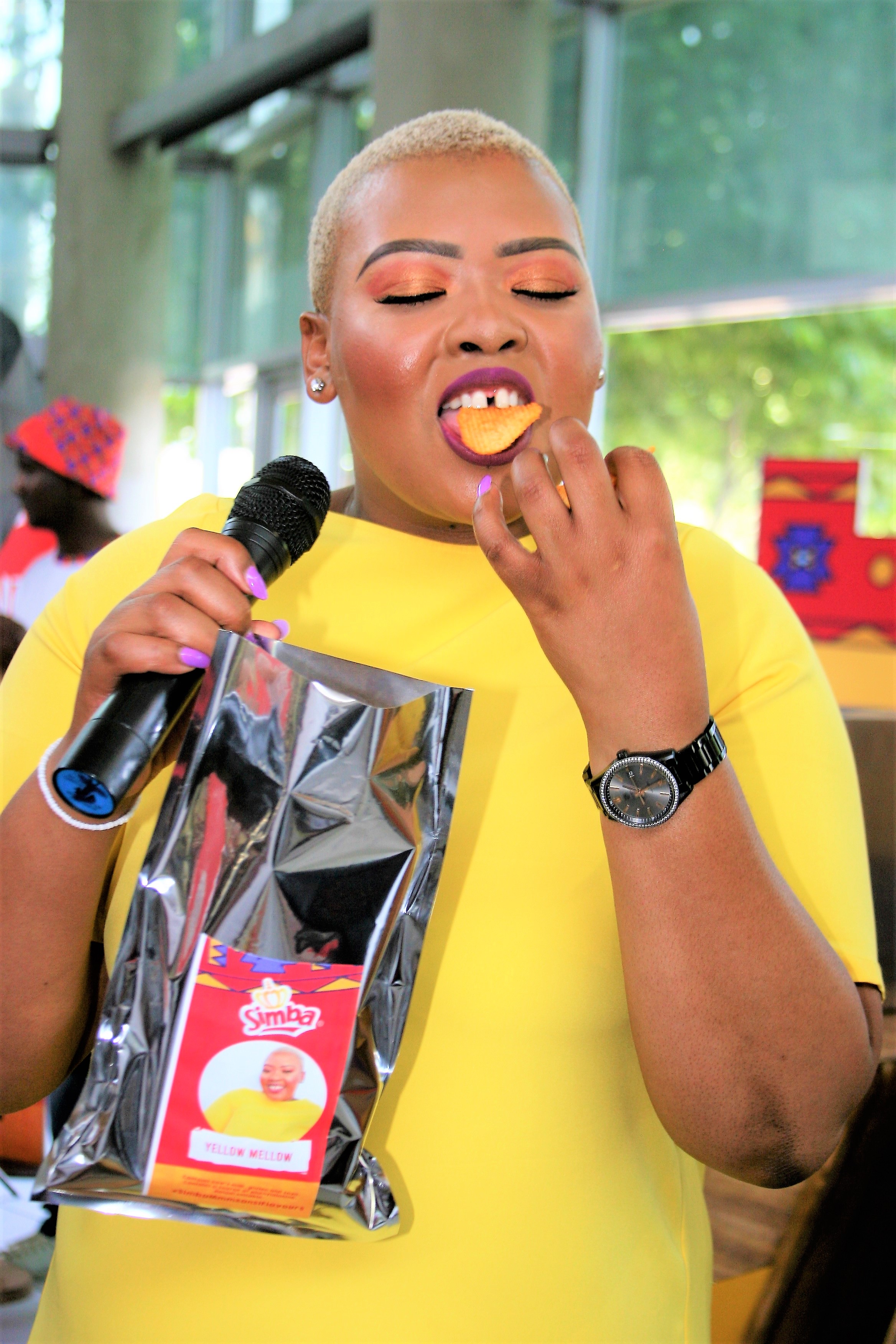 “I remember my mother worked at the UNITRA (University of the Transkei) and every time she came back from work, she’d bring three packets – tomato for me, Thembisa, cheese & onion, Unathi, salt & vinegar!”  That was how bubbly socialite, Anele Mdoda summed up her fond reminiscences of childhood memories centred on the household snack brand that is Simba.

Looking mellow in a yellow sleeveless dress, the radio presenter, the new face of Simba’s current summer campaign, oozed typical vivacity as she held court in the audience of a curious media corps gathered at an upper level of a restaurant overlooking the Maponya Mall food court below.

Simba, South Africa’s snack food manufacturer best known for manufacturing potato and maize-based snack foods which roar with flavour, has just issued forth a clarion call to every corner and kitchen of the country to celebrate and share the iconic flavours that make us truly South African.

On a razzmatazz and pizazz-filled promotional roadshow held at Soweto’s Maponya Mall on a sweltering spring afternoon, the brand had brought along the media personality for a fun tinged activation geared at allowing the ordinary consumer a rare opportunity to create their own Mzansi flavoured Simba chips from a pop-up kitchen located inside the shopping complex’ food court.

Kicked off on Heritage Day as a summer campaign trending under the hashtag: #SIMBAMMMZANSIFLAVOUR– the initiative, in addition to daring the country’s consumer to come up with new and innovative flavours, also offers consumers an opportunity at claiming a share of R5 million in daily cash prizes up until the end of December.

Members of the media were treated to a taste of the entity’s chilli biltong flavoured chips currently available on store shelves across the country from September until March of 2020.  Verily Seffrican in every which way one regarded it, from the name of the flavour to the taste of the snack - the packaging also complements the ethnicity, what with its Ndebele patterns forming the design!

Following on the brief engagement with Mdoda and in betwixt munches of the new chips, everyone involved thereafter beat a path to the food court where the pop-up kitchen was a hive of activity populated by equally curious visitors.  Once there, after a youthful traditional dance troupe had delivered an energetic performance enthusiastically received by shoppers who formed a circled around it, visitors to the Simba kiosk were ushered through the process of creating their own flavoured chips.

First port of call was at a photo booth where one would have their picture taken to be stuck onto a customized pack provided to contain their own creation.  Image and name of your flavour now decorating the silver foil packet, one was then ushered to the kitchen’s counter where hot and fresh out of the oven potato chips awaited to be expertly poured into the packet.  Yet to be flavoured in order to define them,  the next logical step was to move on to a section of the space where a friendly and smiling gentleman manned a counter littered with a plethora of silver spice containers spotting labels of flavours ranging from Kota, Sweet Chilli, Creamy Cheddar to Chilli, Tomato, Chutney, etc.

Allowed only to apply a combination of two spices, the station was where a true gourmand’s imagination was put to the test.  Mdoda, true to form as befits a brand ambassador, was on-point with her choice of package name (aptly Mellow Yellow, in harmony with her elegant yellow dress) as well as spice combination: Creamy Cheddar, a “va-va-vah” of Kota and Sweet Chilli Pepper.

It was a case of voila and Bon Appetit as the blond haired celebrity savoured her flavour in the inimitable manner only she could pull off for the cameras!

The last stage of the light-hearted jaunt was a session inside a video booth where a consumer was encouraged to be recorded whilst performing a crazy jiggle expressing their reaction to the tanginess of their just invented snack!

A while later, back at the upper deck restaurant overlooking the pop-up kitchen, over a lunch of finger snacks, the Fourth Estate got to engage with an executive of the entity which hold 63 percent of the South African crisps market regarding the purpose of their latest campaign.

To a question regarding the Maponya Mall activation of a campaign the brand embarked upon on Heritage Day, this is what Simba Senior Brand Manager, Vuyelwa Mbikwana had to say: “Simba is all about togetherness, it’s about family, it’s about coming together and I think every celebration that we have, Simba is always a part of it and we wanted to come to Maponya because this campaign is about including the community – we wanted to come and launch it in the community.  It’s pointless having a campaign that includes community and we launch it outside of the community – so we came here to Maponya Mall today so we can launch this campaign in the community, with the community.”

Expounding further, she offered, “The campaign is all about finding Mzansi’s favourite.  Now there are certain flavours that make Mzansi, Mzansi – it’s flavours that you’ll not find elsewhere and we believe that chilli biltong is one of those flavours – I mean everybody who goes outside of the country will always say, I miss biltong, I feel like biltong, and the chilli biltong flavour is truly South African.  That’s why Simba decided to launch chilli biltong as part of its campaign from the 24th of September and it’s running up until … we have an unpacked promotion so there is two phases, we got the unpacked promotion which runs up until the end of December, then we’ve got a second phase which runs beginning of January till the end of March next year.” 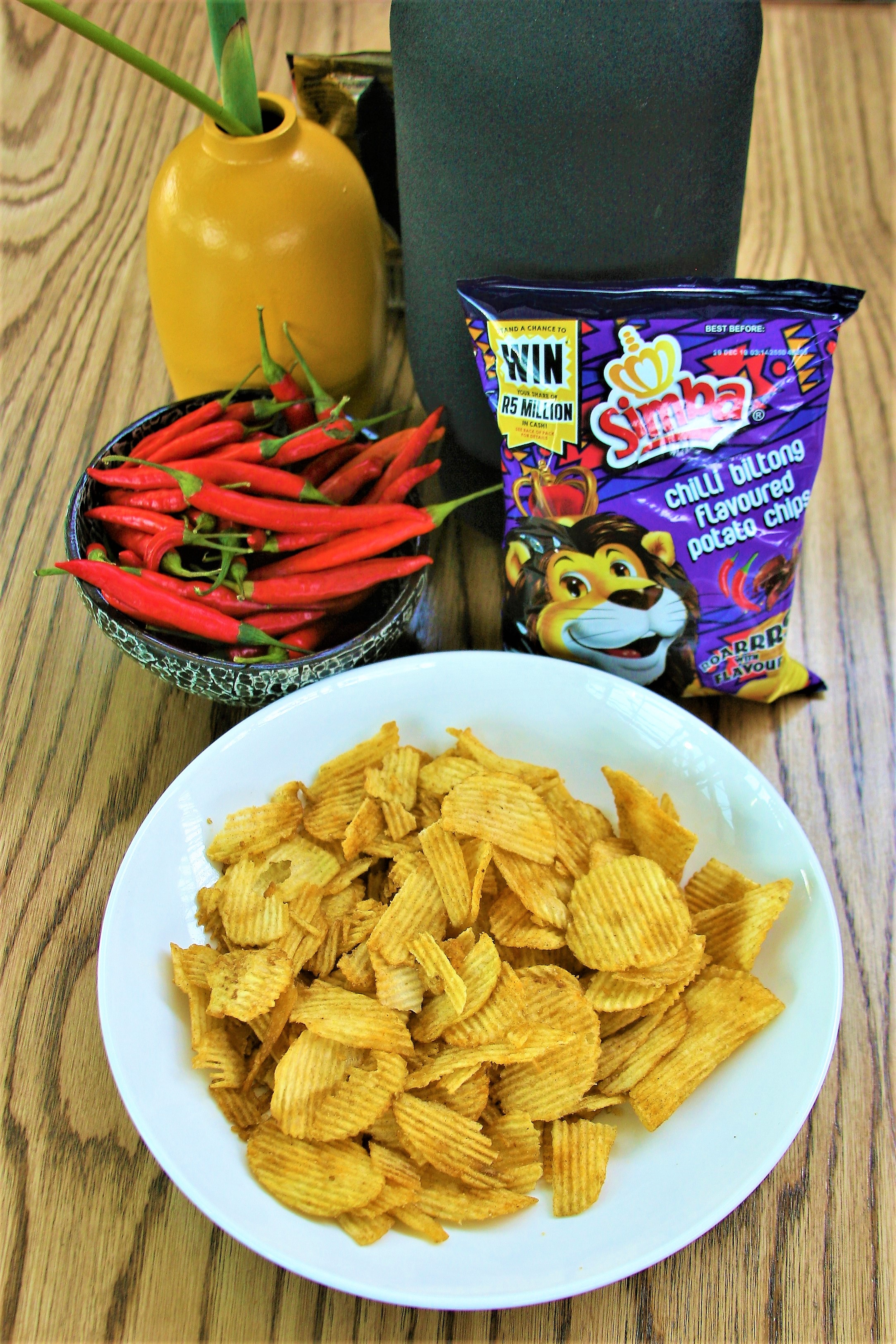 Unpacking some enticing aspects of the campaign, Mbikwana then delved into details of how consumers could go about putting themselves in line for a share of a whopping R5 million in daily cash prizes to be won.  Revealing that the competition begun on the same day as their summer campaign, she disclosed, “now this started on the 24th of September, up until the end of December, today, the 11th of October, we’ve given away just over R800 000 – so we still got R4.2 million to give away!”

To her entity’s choice of Mdoda as the face of the current campaign, this is what Mbikwana had to aver, “Anele is well-loved, Anele is truly South African.  I mean if you look at Anele, she embodies what South Africa is.  She is outgoing, she really truly represents Simba as the brand … uhmm, she’s got a strong heritage and Simba also got a strong heritage – so we wanted to partner with somebody who’s vibey, who’s vibrant, who’s funky, who represents the brand, and we thought of nobody else better than Anele!”

To the enquiry as to who came up with the chilli biltong flavour currently trending on the market, “so it was consumers, we go around, we do research, we ask consumers what flavours – and this is what the campaign is about, now, we are asking consumers again: what flavours make us truly Mzansi?  And that was one of the flavours that came up from the previous campaign we did and research we’ve done, so now we going again and saying, tell us again, what flavours truly make us South African!”