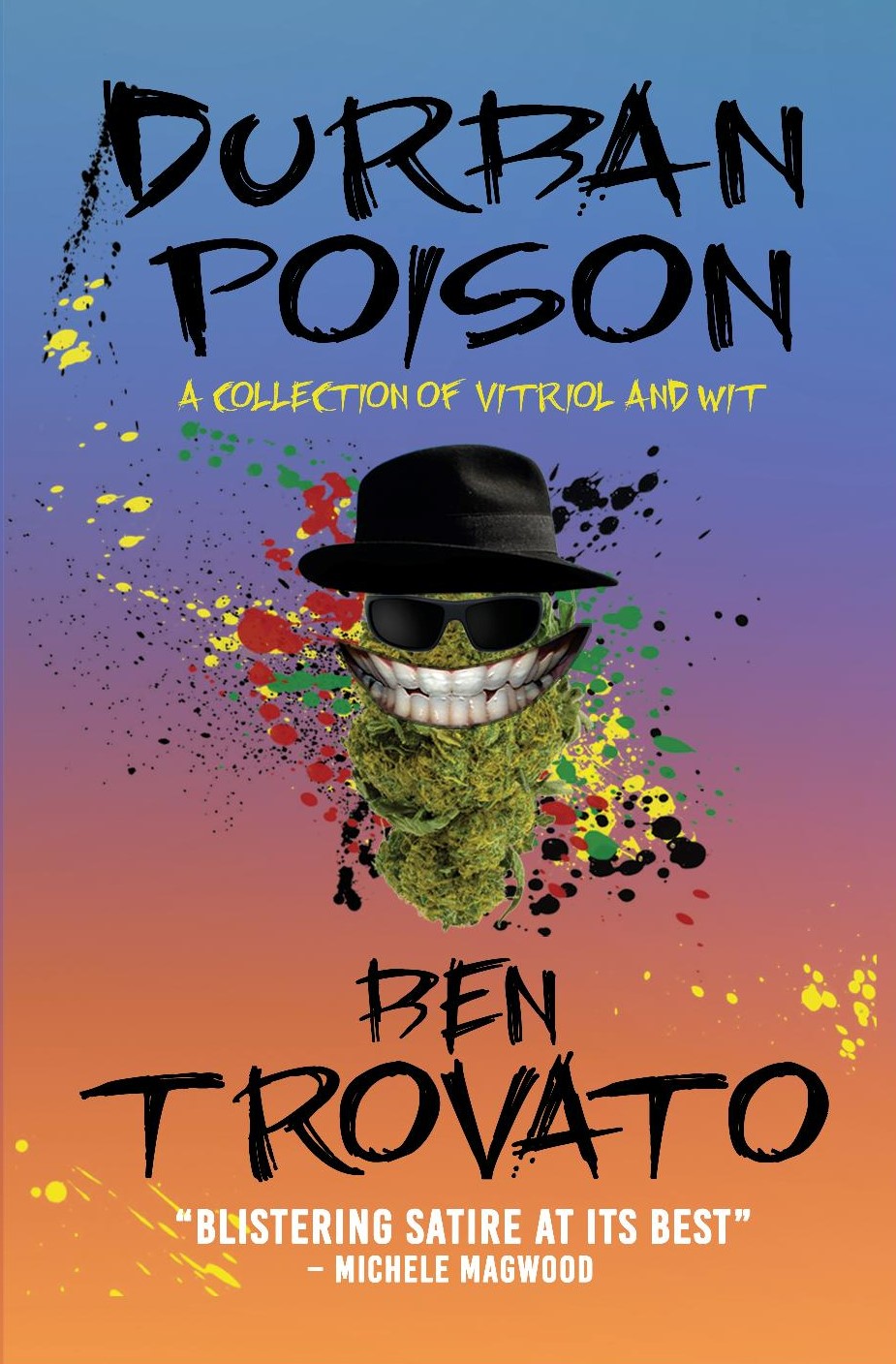 Malls are treacherous enough places at the best of times, but everything becomes immeasurably worse the closer it gets to Christmas.

I self-medicated and went to one the other day. You couldn't move for tables set up outside the shops. The stuff on the tables wasn’t even related to the stuff in the shops. It’s as if anyone is allowed to walk in with a plastic table and set it up anywhere they please. Cover it with a red and green tablecloth, stick a fairy on it and start selling “unique homemade gifts for the whole family”.

“Sir, could I interest you in this delightful post-modern sculpture of a giraffe at rest?”

“F... off. That’s two pieces of driftwood glued together.”

“Not at all, sir. It’s a giraffe at rest. I swear on the life of my hungry children.”

There was a sign up in one shop that read, “The best gifts are unexpected.” In that case, I shan’t bother getting anyone anything. You can’t get more unexpected than that.

I overheard one woman say to another, “He’s not a very materialistic person.” I wanted to tap her on the shoulder and say, “What you mean, lady, is that he has no money. Or he’s a penny-pinching tightwad. Either way, you’re better off without him. Come with me. Let us run away to India and live in a gilded palace surrounded by peacocks and tigers and beautiful eunuchs on leashes pandering to our every whim.”

A lot of men would be far less recalcitrant about going to the mall if they knew there was a place where they could find a beer. And I’m not talking about buying a six-pack and crouching beneath the escalators. Nor am I talking about salacious dens of iniquity where Andalusian virgins gather at the door murmuring in low, husky tones about the range of craft beers that await within.

A simple bar will do. Rough-hewn stools. Rough-hewn staff. Beer from Namibia. Because if there’s one thing the Germans know, it’s Reinheitsgebot. Purity laws. Sure, they got distracted in the 1940s and tried applying it to race, but in the main they’ve kept it down to barley, malt and hops. Probably water, too, although I hate the idea of there being water in my beer.

Toyshops always look like they might sell beer in a room round the back. It makes perfect sense. Toys are fun. Drinking is fun. I can’t imagine a more fun place than a toyshop full of drunk people. Children already behave as if they are drunk so they wouldn’t notice a thing. Being South Africa, though, it wouldn’t be long before an alcoholic paedophile serial killer came along and spoiled the fun for everyone.

So I went into the toyshop and walked to the back and began tapping at the wall to see if there was a secret door leading to the bar. One of the sections sounded hollow so I banged on it. Lo, it opened. I took a step forward.

“Is this the portal that leads to the beer?” I enquired. A woman with a face that would have frightened the Gorgon stared me down. “This is the door to the stockroom.”

Perhaps there was some sort of secret handshake. I put my hand out and she closed the door. Wrong move. I was probably expected to answer three questions. But then why didn’t the keeper of the portal ask them? Silly cow. I shall have her fired. No. Even better. I shall buy the toyshop and stock it with alcohol. I will probably have to remove the toys. That’s it. A toyshop that sells alcohol but no toys. Or maybe alcohol that’s designed to resemble toys. Play with your drink. Drink your toys. You could unscrew Barney the Dinosaur’s head, stick a straw down his neck and suck on a purple cocktail. It’s brilliant. I’ll be rich in no time at all.

So, anyway. I thought I’d take a look around. Lego seems big this year. When I was a child, the options were limited. You could build a small red house with a green roof and a yellow door or you could leave the bricks lying outside your sister’s bedroom. Today, you could build Nkandla out of Lego. It would have been a lot cheaper. And certainly more colourful.

Something called a Belch & Barf Power Dragon took my fancy. It sounds like me on a Friday night, except this one comes with a Rolling Flame Attack. If I had this fantastic feature, I would dare anyone to shout at me about coming home at an hour ill-befitting a man of my age.

I liked the Airbus A380 with detachable wings. Perhaps for the child who enjoys living dangerously by pretending to fly near Russian airspace. There's nothing like realistic debris to crank up the fun. The box says, “Humane design for children.” And, “The more you play with me, the happier I will be.” I've tried that line before. It doesn't work.

In the gun section, there's a die-cast eight-shot revolver for R139. What a rip-off. I can get a genuine 9mm Parabellum on the Cape Flats for less. Almost new. One careless owner. Slight damage to the serial number.

For the boy or girl who dreams of one day going to war, there's a big section devoted to military hardware and personnel. Since it's all made in China, you'd think the Red Army would feature prominently. Inexplicably, it's all Navy Seals and Special Forces. The little plastic soldiers are very lifelike and their intelligence-gathering capabilities are on a par with the real troops who keep rescuing hostages by getting them killed.

“Listen, buddy. Thanks to us, you are no longer being held by Yemeni terrorists.”

“Oh, I see. You want your freedom and your life. Next time we won't bother.”

Indeed. There is no pleasing some people. I suspect that's why you get parents who deliberately bring their children into toyshops two weeks before Christmas. They are terrified of waking up on Boxing Day to find the little bastards stabbing at your jugular with the sharp end of a Power Ranger because they didn't get the Ninja Turtles they asked for.

The kids don't get it. Why are you asking me if I want the radio-controlled dune buggy or the radio-controlled tarantula? Obviously I want both. What? I must point to just one? Fine. I'll take the spider. What do mean I can't have it now? Why the hell not? What's that you're writing down? Who do you work for? F... this. I want new parents.

Since they're only five and can barely articulate the need to poo, they drop to the floor and thrash about and scream as if a sniper got them in the leg.

I moved to another aisle and found a model self-service gas station with a grinning white boy operating the pump. There's also a cash register with a white girl behind it. These are not things you see in real life in South Africa, but when you do, you'll know the country is going down the tubes. Or headed for greater things. I can't tell any more.

Disney, Barbie and Dream Dazzlers are going head-to-head on a range of, well, heads. Styling heads, they're called. Dolls that have been amputated at the shoulders. Each comes with fourteen implements to style their hair. In a decade from now, the unemployed will consist largely of women with perfectly coiffured hair standing at the robots waving combs at us in a vaguely threatening manner.

I overheard one kid say to his mother, “But it's only R399!” Spoilt brat. I once got a peach pip and two chicken feathers for Christmas and I was so grateful that my mother let me wash the dishes for the rest of the year.

My Friend Cayla is blonde, blue-eyed and costs R999. “The smartest friend you'll ever have!” says the box. Given our education system, there's every reason to believe it.

All the dolls except one were white. The black doll was called a Waterbaby. “Feels like a real baby!” What you mean is it feels like a real white baby. Obviously the instructions are different. No dummies or bottles for this little succubus. “Fill baby with warm water.” Are all black people full of warm water? I think the men might be, going by the number lining the freeways with their willies out. We should call them weeways.

Eventually I was asked to leave the toyshop. Not because I got caught looking up Barbie’s skirt. I would never do something like that. I had simply overstayed my welcome.

The rest of the mall was full of people with downturned mouths, dead eyes and the sartorial nous of a Northern Cape goat farmer. Aware that their shopping experience might include being stabbed or shot, nobody bothers dressing up any more. No point risking the good clothes.

Blood is so damnably hard to get out. I’ll just dress like a factory worker from Uzbekistan.

The very old seem to be allowed out at this time of year in greater numbers than usual. They have a lot of questions about stuff that doesn’t concern them.

“A DONGLE! It connects you to the internet.”

At this time of year, it’s quite acceptable to elbow the elderly aside. Some of them probably still enjoy a bit of the rough stuff. Good luck.

Tweet
More in this category: « Here’s who won big at the Feather Awards. Roland Muchegwa, the Zimbabwean blesser, is living large in South Africa. »
back to top