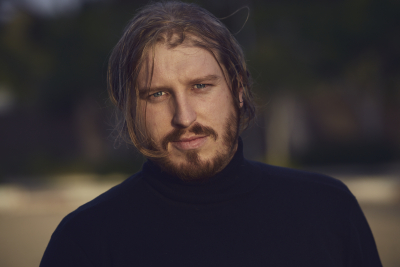 As a winner of SAMA, MTV and GOEMA Awards, 37-year-old Kruger is widely celebrated for his work as a music video director, having directed more than 100 music videos. As a director of dozens of internationally acclaimed short films, Kruger is known for his distinct visual style and character driven stories.

We caught up with this exciting young auteur who revealed why COVID-19 turned out to be a blessing for Fried Barry; why the picture is a first of its kind for South African cinema and his decision to have the city of Cape Town as a character in the film.

How did your love of film start?
I've always loved movies since I was a child. My dad was a big film buff and he always let me watch a lot of stuff. Growing up as a youngster in the '80s I was exposed to a lot of films from the '50s, '60s and '70s and whatever was out at the time, so by the time it came to the '90s I was up-to-date with most films in American cinema. I always enjoyed going into the video rental shop and spending hours picking a movie with my father and brother. At an early age I always wanted to be an actor.

Where did the idea for your debut feature film Fried Barry come from?
Fried Barry was born out of total frustration where I was in my career. I am known in South Africa as a music video director for doing narrative storytelling within music videos and sharp visuals. Although I always came up with my concepts and bands trusted me and let me do anything I wanted, I was still in a box as I had to think about their audience and their music and being able to get it on major music video channels. I couldn't really do my style. Originally Fried Barry was just a three-minute-long experimental film that did really well. We had 59 official selections around the world at festivals and picked up 13 awards. But what came from that was all these amazing pieces of fan art from all over the globe, which was a surprise because people just seemed to really love the main character. I never planned to make it into a feature film at all. I just looked at it as that short was a success and that's it. But where I was at the time I was in a bad place. I had an operation on my kidney and got sepsis and nearly died, went through a break up and my cat got cancer and I went into depression. It was all too much for me at the same time. While I was in this dark hole, I just said to myself what is the number one thing I've always wanted to do with my life, and it was to make a film. I just got the idea one night and I knew that this was the film to make.

You have been working on the film for some time. Can you give us an idea of production from start to finish?
Fried Barry started with me writing a brief scene breakdown and six pieces of dialogue for six actors over the course of three days. A month later we were shooting the film. We had to shoot the film in blocks over a course of a year. I always knew how the film was going to end, but getting to that point was the challenge. But that's where the magic came in because I started to get more ideas while filming and it just developed as we went along, so it really gave me the freedom to be super creative. I would have notes I made the day before filming, or even in the car driving to set, on a scrap of paper. A lot of the ideas within a scene I just got on set while shooting. Which made us all be in the moment when improvising and taking direction carefully. The cool thing about this film is that 80% of this film is improv and work shopped on the day - apart from the dialogue I wrote. As an actor myself, I love working with actors; I love that organic space to be free and feel where anything can happen. After the film was all shot, we had half a year in post-production getting everything together.

How did you cast the film?
I didn't audition anybody for this film. Most of the cast I have worked with before or I had seen their work and wanted to work with them. I placed everybody in their roles, which I knew they would be great at, and I knew they could all do improv with me and be in the moment. Gary Green, my lead, was the only one that didn't improv because he isn't a trained actor. I had to work with him very closely to get exactly what I wanted otherwise the film would not have worked. He never ever saw a script or had any info on what we were shooting each day. To work with Gary, I needed a clean blank slate every day so he wouldn't over think anything and would rather be in the moment without any distractions. But this role was made for him and no one else could have done it justice. He was amazing, always willing to do another take to get it right.

Tell us about casting Chanelle de Jager as Barry's wife?
I always knew who I wanted to cast to play his wife and I asked Chanelle de Jager who I knew would bring something great to the part. It was so important to show some genuine tenderness and her part definitely helped provide a modicum of empathy. I also needed the audience to feel sorry for Barry at some point, so this helped a lot to show their character development. The funny thing was she was originally only meant to be in two scenes and as time went on, I saw how important she was to the story as she was definitely the heart of the film. Every scene she was in, just added much more depth to their characters.

Where was the film shot?
We filmed in and around Cape Town.

What has been the initial reaction to the film?
It has been amazing. We had so many great reviews and fans of the film just love it. We scored 82% on Rotten Tomatoes which is pretty good so I am very happy.

It has already picked up some awards overseas. Can you tell us about that?
2020 was the main festival run for the film. We played at many big genre festivals around the world - including Fantasia in Canada and Sitges in Spain - and so far, we have picked up 22 awards and numerous nominations. Now that the festival run is coming to an end, we will have a wide release overseas within the next few months.

Why is Fried Barry an important film for SA cinema?
Fried Barry is definitely the first of its kind for SA cinema! It's a cult-style film with a mashing up of genres like horror and comedy and the height of indie-dark cinema. But its style is off-beat and crazy; film fans will be in for a treat. In SA we normally make dramas or comedies or films about the history of our country, but things are starting to change which is great and there are many amazing local films coming out. It's important to get Fried Barry out there and to show that this type of film can make money and there is an audience especially overseas. At the end of the day the film business is a business you need to be able to sell your film so you can make another one.  And if we keep making the same type of films here the industry will never change or grow.

What was the vision for the movie?
I set out to create a cult style film and hope it would be a unique movie and something we haven't seen done before especially in South African cinema. It was always my intention to create a film that gained a cult following and that was my challenge. I knew from the start this type of film would have horror and '80s-style fans obsessed, as I am that youngster who loved all those types of films and still do! Fried Barry melds sci-fi, horror and even comedy elements into a 'road-movie' format where we meet dozens of different characters over many locations. We wanted the sum of all these experiences to make for an affecting and harsh look at humanity but make the audience feel as if they're going on this trip with Barry.

What influence, if any, have your roots had on your work?
Some of the key directors who have influenced my style are Steven Spielberg, Christopher Nolan, David Cronenberg and Chris Cunningham.

This movie has a very clear aesthetic and palate. What led to this?
One major element in the film is how Cape Town is portrayed. Often in film, Cape Town is either portrayed as a beautiful and exotic location or it is dressed-up to play a different city entirely. We wanted to show a darker and grittier side of Cape Town, while still clearly having the city as a character in the film. This motivation can be seen in the locations we chose that evoke this underworld feeling and present a strong colour palette and harsh geometry while still having that '80s cinema look with colours.

The film had its world premiere at the Cinequest Film Festival in the US in 2020 just before this crazy pandemic. How did this effect your film?
When the pandemic happened all I could think of was 'trust me to make my first film and this happens'. I was very worried and I thought the film was going to bomb and get lost. But it ended up doing so much better. Even though we had a great response in the US, after that most of the festivals went to online platforms. Instead of 500 to 600 people watching your film in the cinema, we picked up 5000 to 6000 per screening at each festival. That gave us more reach to our target market and the audience out there which led to a lot of online talk. I think festivals in the future should have the option for fans to go to the cinema and/or watch at home online. Festivals will also make more money and filmmakers will benefit from this. As at the end of the day you want people to see your film.

Any advice for aspiring filmmakers?
Get out there and make movies! It's a cliché, but it's true! Worrying about whether your gear or your movie will be good enough only leads to praxis paralysis. A bad movie is better than no movie. It's all about creating content to share

What next for Ryan Kruger?
I have a handful of scripts for feature films I'd love to do, and I am busy completing a four- and half-year project of eight experimental films.