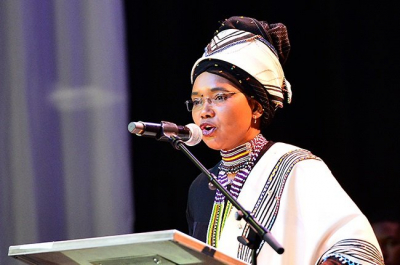 After 37 years in the industry, the iconic broadcaster Noxolo Grootboom is set to read the isiXhosa news bulletin for the very last time tonight at 7pm on SABC 1.

The legendary anchor inspired a nation through her stellar news reading skills and her iconic signature sign-off, "Ndinithanda nonk’ emakhaya", that warmed homes every evening.

Grootboom has been a significant contributor to the country’s history through covering many historic events.

She came to Johannesburg from the Eastern Cape because of circumstances beyond her control.

In 1983, when she got a job working as a typist at the SABC, to her it was achieving "gold in the city of gold" for herself, her mother and her brothers.

"It was something that was going to propel me to fulfil my dreams of rebuilding our lives as a family and getting us out of the back rooms of Soweto. I am a very prayerful person. I asked God that in all that I do in Johannesburg may I not end up in the drains of the city."

Grootboom remembers the first time she had to present the news. She had not been employed as a news presenter but had been filling in for Thandi Mesatywa, who was off sick for some time.

"It was emotional for me because I was holding the spot for someone who I held in high esteem. Someone that I respected in the industry and who instilled in me the love for news reading, not knowing that I would have that opportunity one day."

Grootboom used to watch the way Mesatywa read the news and loved her craft, which planted a seed inside her.

"When she passed, I got that job permanently. All credit goes to sis Thandi. Even in sickness, after each bulletin that I anchored she would pick up the phone and mentor me, telling me what I did wrong and what I did right. As time went on it became compliment after compliment. The last thing she said to me before she died was that this (news reading) is where I belong. She said it was my calling and her wishes were fulfilled."

Grootboom has always felt the presence of Mesatywa, like a guardian angel watching her from a distance.

Over the years Grootboom has been a light to many South Africans who would be glued to their screens come 7pm on SABC1 for the isiXhosa news bulletin. Her famous "Ndini thanda nonke emakhaya" closing phrase was her way of saying thank you to the people of South Africa.

As the country tunes into Grootboom’s final news bulletin tonight (Tuesday) at 7pm on SABC 1, she will be dressed by Nombuyiselo Zinco, a designer from Gqeberha, who offered to dress the media darling for this grand occasion.

"She is a small business owner who is self-taught in making isiXhosa garments and she called me offering to sew me something special. All the pieces that I will be wearing were put together by her and her two daughters and the bead work was done by her 7-year-old son, she said."

Grootboom will show her gratitude to the millions of South Africans who lifted her to great heights during her last bulletin.