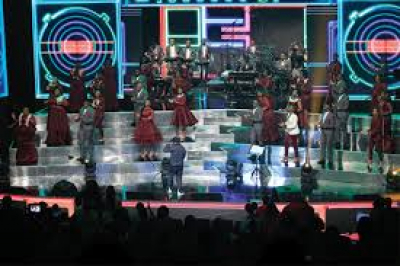 The 16 track album is led by singles Ndezel Uncedo and "The Victory Song" that set the tone for a rapturous experience. Ndenzel Uncedo led by Esethu Mngxuma is taken from the Methodist church Xhosa hymnbook. The rousing traditional hymn is delivered with impeccable rhythm and gusto. It is about finding refuge in God at a time of difficulty, pain and loss.

The recording was conducted without choir master Lindelani Mkhize on stage due to ill health, but he still led from behind the scenes ensuring that the performance remains spirited and uplifting.

The group has also signed with Universal Music Africa (UMA), a division of Universal Music Group (UMG). The stable is backed up by top US-based label Motown Gospel, which will release the group’s music in the US and Canada.

Looking back at how far the group has come, co-founder Mkhize recalls his urge back in 1996 to introduce gospel music that he grew up on to the broader South African market. He envisioned music that did not emulate Rebecca Malope’s type of gospel music as many up-and-coming gospel artists opted to do during those times.

"A lot of gospel artists that came out sounded like Mam’ Rebecca Malope and I felt there was a big gap between the gospel I grew up on and the gospel that people had been accustomed to. I approached Pastor (Mthunzi) Namba first before we took the idea to Pastor (Jabu) Hlongwane to help bring this vision we had to life,” said Mkhize.

"The first two albums were badly received, "he said chuckling.

"I mean they did really bad, but I think it is because of the new style we were bringing onto the market. It was only on our third album that the reception grew when we started singing and producing original South African songs like Siliwelile that people started to sit up and take note of what we were bringing to the table," he said.

It was also at that time when the trio approached an array of already established artists like Sharon Dee, kwaito star Ntokozo, Bishop Benjamin Dube and Sibongile Khumalo, among others, to help grow the vision and brand to what it is today.

As the brand grows into many generations, Mkhize hopes that it will forever be remembered for what it is doing, for what it has done, and what it is going to do.

"The fact is that a lot of young South African people got a platform through it and they got to pass through Joyous Celebration on their way to establishing their own careers, is exactly what I would really love to see JC being known and remembered for. A platform for musicians to establish and make a name for themselves."

Twitter
More in this category: « Over R1 million raised to pay medical bills for Dr Sindi currently in hospital with Covid-19. SPHEctacula & DJ Naves celebrate 10 years in the industry with new album, available for pre-order now. »
back to top