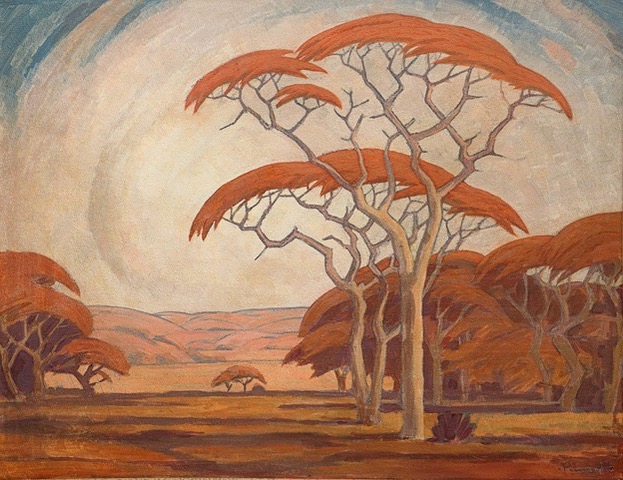 JH “Henk” Pierneef demonstrated his enduring appeal at Strauss & Co’s R55-million Spring sale, held in Cape Town on 7 October, achieving a total of R9.65 million from nine lots sold. The top lot, a monumental study of interlaced camelthorn trees in a landscape near Thabazimbi, sold for R2.73 million. The results marked a welcome return to form for Pierneef, whose prices had been diluted by a recent fire sale by a distressed collector.

This short-term market trend has been corrected by Strauss & Co, and bodes well for its forthcoming November sale in Johannesburg. The upcoming sale features 14 lots by Pierneef, all paintings, each demonstrative of his great facility within the landscape genre.

Works in Pierneef’s later, monumental style have long represented the summit of achievement for serious collectors. The upcoming sale includes two lots representative of this style. A 1946 work titled Landscape (estimate R2 – 3 million) is a stylised bushveld scene featuring a choreographed vista encompassing trees, mountains and billowing clouds. The desaturated tones of this work contrast with the rusted red and browns of Landscape with Trees (estimate R1.5 – 2 million), which is dominated by canopied camelthorn, familiar patriarchs of Pierneef’s later landscapes.

“Bury me under a camelthorn tree,” Pierneef once said, “with its straight, manly character guarding me and its roots deep in the soil of Africa.” His utterance was an expression of love, not a dictum, a fact evident in another major Pierneef lot on offer.

Marone, District Lydenburg (estimate R2 – 3 million) depicts a settled landscape about to be moistened by light afternoon rain. Dated 1948, the artist’s bushveld landscape unusually features a pair of pawpaw trees as its central arboreal feature. This impressive painting, showcasing Pierneef’s ability to balance harmoniously naturalistic description and stylised invention, was based on an earlier watercolour study, sold by Strauss & Co in March 2017 for R102 312.

“How wonderful, now, that the present lot, the magnificent conclusion of the study, has come to light,” says Strauss & Co senior art specialist Alastair Meredith. “Much larger and worked up in oils on canvas, the painting is as dramatic as it is assured, and shows the artist at his latter-career peak.”

Notwithstanding his predilection for tried and tested subjects – camelthorn trees, mountains, cumulous clouds – Pierneef’s body of work contains many surprises. A highlight of Strauss & Co’s October sale was Gold & Green, Rooiplaat, N.T., a phenomenal neo-impressionist study of a riverine landscape northeast of Pretoria. Bidders visibly sat up when it went under the hammer. The work more than trebled the pre-sale estimate when it sold for R2.73 million.

The upcoming sale includes another gem from Pierneef’s earlier career. Replenishing rain is the central feature of An Approaching Storm (estimate R350 000 – 450 000), an evocative canvas painted in 1926 after his return from an influential European tour. Meredith, who is an expert in earlier twentieth-century South African art, describes Pierneef’s works from this period as “thrillingly experimental, stylistically varied and fearlessly expressed”.

A visionary artist who replenished himself through travel, the upcoming sale includes a number of works by Pierneef recording his wanderings across southern Africa. Matopos (estimate R500 000 – 700 000) depicts the granite mounds in present-day Matobo National Park in southwest Zimbabwe.

The two small-scale oils, Kameelberge naby Johan Albrechts Hoogte, SWA (estimate R200 000 – 300 000) and Hartbeeshuisie (estimate R220 000 – 280 000), derive from Pierneef’s two trips to Namibia (formerly South West Africa) in 1923 and 1924. The former depicts an outcrop in southern Namibia and features dramatic, dusky pinks, while the latter is a gestural portrayal of a home and coop sheltered by trees.

Commenting on the latter painting, Meredith says: “It is the kind of picture in which critics of the time recognised a deliberate attempt at founding a particular South African School of painting: it captured a unique, local light, and gave prominence to the country’s vernacular architecture.”

The artist’s ability to use pigment to translate an ephemeral appreciation of light is abundantly clear in Extensive Landscape, Dusk (estimate R250 000 – 350 000), a small painting that nonetheless compacts vastness, solitude and awe into a horizontal frame.

Pierneef’s work is a felicitous part of the Strauss & Co story. In 2009, at the company’s inaugural sale in Johannesburg, Pierneef’s woodcut of Meerlust was the second lot to go under the hammer. Since then, Strauss & Co has successfully sold a total of 340 lots by this master, achieving nearly R200 million in sales. Fashions may shift, headwinds may blow, clouds may gather, but Pierneef’s status among collectors is assured.

Strauss & Co’s offering of 14 lots by JH Pierneef will go under the hammer on Monday, 11 November at 89 Central Street, Houghton, in Johannesburg. The sale will also include a collection of Edoardo Villa bronze sculptures from the estate of Aldo Carrara, a lifelong friend of the artist, as well as feature a segment devoted to South African artists linked to Paris.

Strauss & Co will be hosting an extensive programme of public talks and social events in the lead-up to this sale.

WALKABOUTS
Saturday 9 November and Sunday 10 November at 11 am

Tweet
More in this category: « Roland Muchegwa, the Zimbabwean blesser, is living large in South Africa. Musical magic at Gold Reef City this November. »
back to top