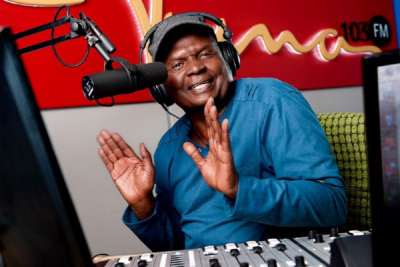 The radio community is in mourning after the news of the death of veteran radio host Grant Shakoane.

Details around his death are still unknown at this stage, but radio personality and close friend Tim Modise took to Twitter last week to reveal Shakoane was "in a serious condition" at a Johannesburg hospital for an unknown condition.

"Our friend & big brother, the radio 'gentle giant' Grant Shakoane is in a serious condition at one of the hospitals in Joburg. His wife informs me that he’s been in this battle for a while. Join me in praying for his recovery. We love you," Modise wrote at the time.

Modise returned to Twitter in the early hours of Thursday morning to pay heartfelt tribute to his friend, and offer his condolences to the Shakoane family.

"Like many of us and his friends, I’m saddened by the news. I extend my sympathies to Ausi Albertina and family. I wish you strength. Modimo a le fodise," Tim wrote.

Shakoane was affectionately known as "Shibabadoo Shibaba". He used to present on the weekends during the "romantic" time slots playing R&B and slow jams during his time on Metro FM and Vuma FM.

He started his journey as a translator at an advertising agency based at SABC, before He decided to audition to be a radio host at the public broadcaster.

Shakoane’s career spans more than three decades, with a range of stations, among others, Metro FM,where He hosted GS Connection, launched catchphrases like "if its good,its grant" and "For the time of your life and life of your time".

He also played a major role in getting late former radio personality Eddie Zondi his first break at Metro FM and He was one of the pioneers of the original "Sunday Love Movement" line-up on Radio Metro.

"Grant Shakoane made his mark in the broadcasting industry and leaves behind a rich legacy. He was indeed one of the giants of our airwaves.

"As the Ministry of Communications and Digital Technologies, and custodian of broadcasting policy in country, we acknowledge the role that he has played in shaping the broadcasting industry in South Africa, and the many young people he inspired," Ndabeni-Abrahams said.

The Minister has conveyed condolences to the family and friends of Shakoane.

More in this category: « Call for nominations for the 9th Gender Mainstreaming Awards 2021 sponsored by Accenture, Absa and Barloworld. Film Soundtracks Hit The Right Notes on Spotify Ahead of This Year's Oscars. »
back to top