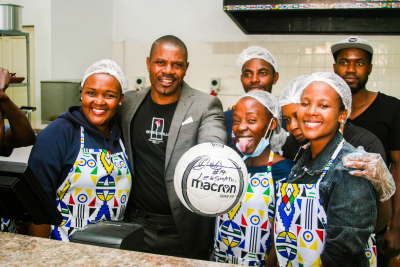 Just across the road from where the Freedom Charter was declared in 1955 in Kliptown, a man who captained one of South Africa’s most popular sporting brands, namely, Orlando Pirates FC, added another feather to the cap of his exemplary life by realizing the opening of a takeout restaurant he jointly owns with a long-standing business acquaintance.

A joint venture with his buddy, Reza Amod – a globetrotting restaurateur and businessman with whom he previously established a clothing brand named Fantastic 14 (after the jersey number he donned throughout his playing career with the Buccaneers) – Lucky, looking the part dressed up in a stylish two-piece suit, described the moment of the commencement of business as, "another milestone" (to add to the clothing line and the foundation in his name), whilst excitedly adding that he felt "over the moon".

Lending its registered name from a common term of reference he picked up from social mediacorrespondences – where admirers referred to him as, "Grootman" (big brother) – the restaurant has the now retired soccer player’s touches, from the exterior and interior design (which display bold black paint punctuated by a kaleidoscope of Ndebele pattern strips) to the choice of menu on offer. At the front-of-house, customers are met by expert decorations of signed soccer jerseys belonging to Lekgwathi and other players he exchanged with pending his playing days. Signed soccer balls occupy pride of place along walls in sight and the huge menu board overhead brims with appetizingly-named choices ranging from chicken, stews, fish – to "tailor-made" menu of kotas (quarter of bread hollowed and filled with chips and meaty ingredients!)

Outside of the restaurant, framed posters chronicling the long-serving captain’s achievements adorn the walls – with one titled, The Captain’s Promise, adding an exquisite touch. Depicting Lekgwathi – who donned the Buccaneers armband for some nine seasons betwixt the years 2002 – 2014 and earned 14 caps in Bafana Bafana colours – pending a soccer match, it has the following emblazoned onto it: I promise to always serve quality, fresh food at affordable prices with friendly and efficient service! With prices ranging from R13 for a pap and gravy offering to R110 for a full chicken grill served with fries or pap – inter alia – they understandably cater for the duo’s target market.

By manner of segueing into this nationwide Achilles Heel, Lekgwathi alluded to entering into such a post-career venture as a means of ensuring that, as a man, he continued taking care of his family – adding ruefully that many of his fellow sportsmen fell into the trap of no longer being able to provide for themselves and loved ones once their playing days were over. His point was resonated by his very first manager at Pirates, Augusto Palacios, who was in attendance to lend moral support. Opined the Peruvian, "I think continues his leadership. He was the captain of Orlando Pirates for too many years. Now he comes into the business area when too many players are not doing after retiring. I congratulate him about his professional capacity, because it is very important to support your family. I think he is a good role model and an example for all the players who are playing now and who in the future will retire. And I congratulate him and hope all the ex-players can follow the same way, because this is the way you make income for your family."

"Let them follow his example, commented Clement Rampa, a sergeant in the South African Police Services, also alluding to local footballers – erstwhile and current – when asked what Lekgwathi (who happens to be his Soshanguve homeboy, as well as inviting him personally to the opening) venturing into another career spelt for a fan such as himself. A member of a Pirates branch colourfully dressed in overalls scribbled with club slogans, Rampa suggested that retired soccer players would do well to “step into the shoes of Lucky Lekgwathi."

Amod, who has in the past opened restaurants in Asiatic locations such as Dubai, Thailand and Pakistan, couldn’t be drawn as to the breakdown of ownership of the eatery betwixt himself and Lekgwathi, expertly avoiding the enquiry by stating that "it was a matter between him and Lucky". Going on to mention the extent of Lekgwathi’s involvement in the new venture – whilst reminding of a past history of business by the duo (Fantastic 14 in particular) – he gave the impression that theirs wasn’t merely another activity trading on the individual brand of a popular sportsman geared towards wooing a certain demography of customer.

Pressing him further shortly before a ribbon-cutting and champagne-popping segment of the media launch, Amod outlined a vision where he intended associating the Grootman brand (whose g is substituted with the location logo) with other sportsmen, whilst establishing more eateries at other places such as Tembisa, Polokwane, Soshanguve, etc. "This is the shop where you are gonna meet many celebrities, soccer players, all hosted by captain fantastic, Lucky Lekgwathi!" Amod exclaimed at the entrance of an address where the likes of his business partner’s former colleagues, Abednego Netshiozwe and Palacios had already set feet!

Offered the man described as humble by a representative of an energy drink brand which saw it fit to make him its ambassador, "to the community of Kliptown, we are here to feed you. We wanna bring job creation." Lekgwathi promised, momentarily interrupted mid-speech by a duo of admirers who passed cordial acknowledgements – further promising the community that his "home of legends" place-to-be will be one where they get to see "soccer players live!"

More in this category: « Film Soundtracks Hit The Right Notes on Spotify Ahead of This Year's Oscars. Jesus Our Philosopher: The Mechanics of Our Conversations. »
back to top