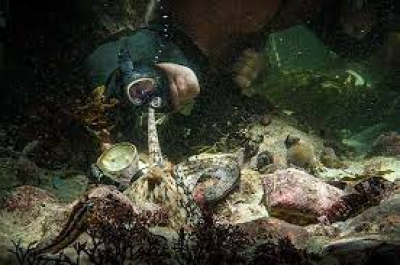 The proudly South African Oscar won by ’My Octopus Teacher’ for Best Documentary Film on Monday morning has laid the foundation for an unprecedented increase in ocean awareness.

'The film, which has won more than 20 international awards, including Best Documentary at the British Academy Film Awards (BAFTA) and Producers Guild of America Awards, becomes the first nature documentary to win an Academy Award since The Cove in 2010.

Craig Foster, a documentary filmmaker for 28 years, says the Oscar victory brings life affirming kudos to the media advocacy work by the film’s producing entity the Sea Change Project, which he co founded with My Octopus Teacher Associate Producer Ross Frylinck in 2012.

"The Academy Award elevates the Great African Seaforest and surrounding ocean of South Africa into global iconic status. This is excellent news for us, because it underlines what we have been aiming for: to show the world that we are sitting on a biodiversity treasure trove that is deeply worthy of protection."

"What has been most exciting for us as an organisation has been the feedback. We have received thousands of messages from people around the world. Many have started diving, studying marine sciences or using My Octopus Teacher as a tool in mental health workshops, and in discussions around emotional ecology and deep nature connection. We wanted to showcase this wonderful ecosystem, the Great African Seaforest, to the world, and we have succeeded."

In the film, Foster utilises animal tracking techniques he learned when documenting the San people of the Kalahari Desert for The Great Dance: A Hunter's Story (2000) and My Hunter's Heart (2010). In the years that followed, he found the San techniques indispensable when observing creatures in the oceans around Cape Town.

An initial interest in diving daily without a wetsuit to document how the human body adapts to cold, and builds a primal immune system, led to a chance meeting with a common octopus that first became his subject, and then his teacher as he followed her through the kelp.

During his journey he invited fellow filmmakers to join him in sharing the extraordinary experience.

Award-winning cameraman Roger Horrocks would become director of photography, while eventual co-director Ehrlich would stand emotionally before the world grasping an Oscar.

Twitter
More in this category: « Jesus Our Philosopher: The Mechanics of Our Conversations. Trigger signs Survivor host Nico Panagio as Brand Ambassador. »
back to top