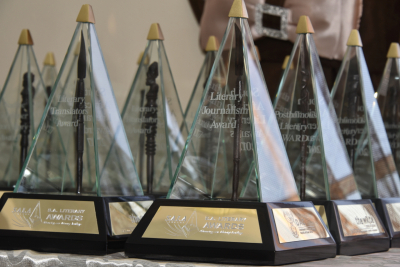 This is a final reminder for the submission of nominations for the 16th South African Literary Awards.

Until this time, nominations may still be submitted through our online submissions platform on www.sala.org.za.  Responses to the submitted nominations are underway, the final date to release these is 14th May 2021. All submissions that came through will be responded to by this date.

Also exciting this year is the new category, the Regional Poet Laureate Prize, which will include the selection of the Provincial Poets Laureate SALA will be inaugurating on 7th November 2021, the AU-declared International African Writers' Day. This is another milestone of the South African Literary Awards where provinces will also have a representation of the Poet Laureate.

"We are excited with the response received this year, 2021. Submissions came in in good numbers, we have even seen a slight improvement in the submission of African Languages and young writers. This shows that, with continued effort and relevant ways to developing and promoting literature and our languages, the battle for preserving and appreciating our languages and literature will be won eventually," said Mr Morakabe Raks Seakhoa, the SALA Project Director and Managing Director of the wRite associates.

"We are also seeing a good number of First-time Published and Children's Literature authors: this is encouraging and very exciting as, indeed, we need new voices in the field, and work targeting children so that they are cultivated and conscientised from an early age. The aim of the South African Literary Awards has always been to promote our languages, writers, writing and reading," concluded Mr Seakhoa.

Twitter
More in this category: « Veteran Soul City actor Aubrey Moalosi passed away. Mzansi, Family Feud SA is back with Season 2. »
back to top