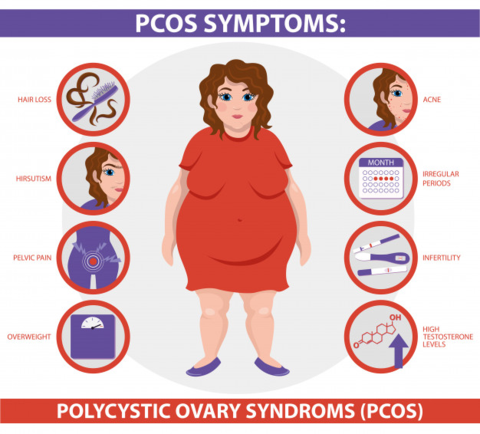 What are common signs and symptoms of polycystic ovary syndrome (PCOS)?

Common PCOS signs and symptoms include the following:

Although the cause of PCOS is not known, it appears that PCOS may be related to many different factors working together. These factors include insulin resistance, increased levels of hormones called androgens, and an irregular menstrual cycle.

What is insulin resistance?

Insulin resistance is a condition in which the body’s cells do not respond to the effects of insulin. When the body does not respond to insulin, the level of glucose in the blood increases. This may cause more insulin to be produced as the body tries to move glucose into cells. Insulin resistance can lead to diabetes mellitus. It also is associated with acanthosis nigricans.

What can high levels of androgens lead to?

When higher than normal levels of androgens are produced, the ovaries may be prevented from releasing an egg each month (a process called ovulation). High androgen levels also cause the unwanted hair growth and acne seen in many women with PCOS.

What can irregular menstrual periods lead to?

Irregular menstrual periods can lead to infertility and, in some women, the development of numerous small fluid-filled sacs in the ovaries.

What are the health risks for women with PCOS?

PCOS affects all areas of the body, not just the reproductive system. It increases a woman’s risk of serious conditions that may have lifelong consequences.

Insulin resistance increases the risk of type 2 diabetes and cardiovascular disease. Another condition that is associated with PCOS is metabolic syndrome. This syndrome contributes to both diabetes and heart disease.

Women with PCOS also tend to have a condition called endometrial hyperplasia, in which the lining of the uterus

becomes too thick. This condition increases the risk of endometrial cancer.

Are treatments available for women with PCOS?

A variety of treatments are available to address the problems of PCOS. Treatment is tailored to each woman according to symptoms, other health problems, and whether she wants to become pregnant.

How can combined hormonal birth control pills be used to treat women with PCOS?

What effect can weight loss have on women with PCOS?

For overweight women, weight loss alone often regulates the menstrual cycle. Even a loss of 10–15 pounds can be helpful in making menstrual periods more regular. Weight loss also has been found to improve cholesterol and insulin levels and relieve symptoms such as excess hair growth and acne.

How can insulin-sensitizing drugs help treat women with PCOS?

Insulin-sensitizing drugs used to treat diabetes frequently are used in the treatment of PCOS. These drugs help the body respond to insulin. In women with PCOS, they can help decrease androgen levels and improve ovulation. Restoring ovulation helps make menstrual periods regular and more predictable.

What can be done to increase the chances of pregnancy for women with PCOS?

Successful ovulation is the first step toward pregnancy. For overweight women, weight loss often accomplishes this goal. Medications also may be used to cause ovulation. Surgery on the ovaries has been used when other treatments do not work. However, the long-term effects of these procedures are not clear.

Androgens: Steroid hormones, produced by the adrenal glands or by the ovaries that promote male characteristics, such as a beard and deepening voice.

Cardiovascular Disease: Disease of the heart and blood vessels.

Cells: The smallest units of a structure in the body; the building blocks for all parts of the body.

Cholesterol: A natural substance that serves as a building block for cells and hormones and helps to carry fat through the blood vessels for use or storage in other parts of the body.

Diabetes Mellitus: A condition in which the levels of sugar in the blood are too high.

Endometrial Hyperplasia: A condition in which the lining of the uterus grows too thick. A specific type of endometrial hyperplasia may lead to cancer.

Glucose: A sugar that is present in the blood and is the body’s main source of fuel.

Hirsutism: Excessive hair on the face, abdomen, and chest.

Infertility: A condition in which a couple has been unable to get pregnant after 12 months without the use of any form of birth control.

Insulin: A hormone that lowers the levels of glucose (sugar) in the blood.

Metabolic Syndrome: A combination of factors, including elevated blood pressure, waist circumference of 35 inches or greater (in women), higher-than-normal blood glucose level, lower-than- normal levels of “good” cholesterol, and high levels of fats in the blood (triglycerides), that contribute to diabetes and heart disease.

Oestrogen: A female hormone produced in the ovaries.

Ovaries: The paired organs in the female reproductive system that contain the eggs released at ovulation and produce hormones.

Ovulation: The release of an egg from one of the ovaries.

Progestin: A synthetic form of progesterone that is similar to the hormone produced naturally by the body.

Tweet
More in this category: « Family planning is not just about contraceptives and preventing pregnancy. Understanding Midwives and Midwifery. »
back to top