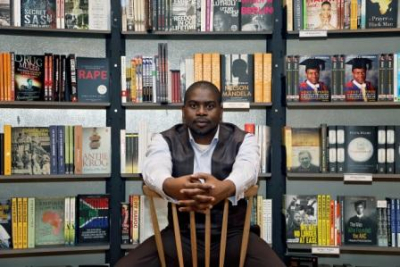 A new edition of Nthikeng Mohlele’s collection of short stories, The Discovery of Love, is out now from Jacana Media.

The deal was signed with The African Literary Agency.

The Discovery of Love, explores and heightens one of the dominant themes in Nthikeng Mohlele’s literary oeuvre, that of love. In this collection love is reflected upon in expansive and unexpected dimensions. It becomes the backdrop against which Mohlele delves into the intricacies of human agency with profound and often unexpected effects. These stories dazzle; they are wide-ranging in scope, yet particular in their authorial intent.

Jacana has also published a new edition of Mohlele’s acclaimed novel, Small Things in May as part of their Africa Month Festival.

Small Things is a book that is ripe with wit, eloquence and beauty.’ – Niq Mhlongo, editor and contributor, Joburg Noir

'… a bigger story and more heart than many books five times its size. A rare, literary delight.' – Charles Cilliers, journalist and author

'Small Things is where it all begun. Bravo.' – Zukiswa Wanner, author of Hardly Working: A Travel Memoir of Sorts

'… bewitches the senses and the intellect in this masterpiece.' – Fiona Snyckers, author of Lacuna: A Novel

'A master at depicting urban lore, even the wretchedness of city life is shot through with a philosophical whimsy.' – Kwanele Sosibo, Mail & Guardian

… an exhilarating mix of brutal wit, stinging irony, x-ray observational skills, slick sex, a memory like a computer and a profound penetrating philosophy.’ – Antjie Krog, author of Country of My Skull

'He can make words bleed; but he can also make them laugh and sing.' – Fred Khumalo, author of The Longest March

'… poetic diction … captured in fluent prose, a rare precision in the use of words and a remarkable sense of lyricism. '– James Ogude, author of Ngugi’s Novels and African History

Nthikeng Mohlele was partly raised in Limpopo and Tembisa Township, and attended the University of the Witwatersrand, where he obtained a Bachelor of Arts in Dramatic Art, Publishing Studies and African Literature. He is the author of five critically acclaimed novels: The Scent of Bliss (2008), Small Things (2013), Rusty Bell (2014), Pleasure (2016) and Michael K (2018).

More in this category: « A compelling, raw and memorable read - Sky-Brids & Ravishers by Musa Kheswa, The Black Leopard - one of Africa's most elusive big cats captured on film. »
back to top