US Marines in the Congo-Beni War - based on true events. 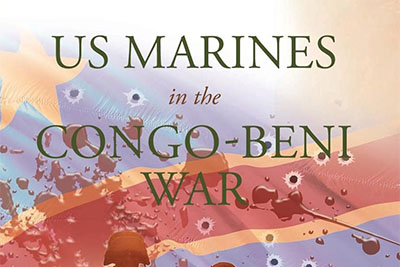 US Marines in the Congo-Beni War by Hubert Kabasu Babu Katulondi is a spell-binding read. It is based on true events.

Coming out of the so-called African World War, the country is beset with a number of problems, infrastructure is falling apart, roads are muddy and mere tracks in the jungle, schools are in a state of disrepair.

There are numerous Congolese and foreign insurgents that kill, rape and loot the country’s valuable products – gold, diamonds, coffee, cocoa, niobium, and uranium to name a few. The government loses out on the taxes and the Congolese themselves live in abject poverty and in fear.

In the book, a US marine, Captain Carson, is sent to the Congo by the Pentagon to form part of a team of military instructors selected to train a battalion of Congolese Special Forces. He boards a UN plane in Goma on his way to the training centre in Kisangani, in the Democratic Republic of Congo. The plane crashes on route. Carson and other passengers survive, only to be attacked and captured by merciless Simba militiamen. Captain Carson, who had fought in Iraq and Somalia, succeeds in subduing their captors, helped by a CIA agent who is a former Marine, a Congolese army lieutenant and a child soldier.

The previous night, the city had been devastated by a ferocious attack by rebels who abducted an American missionary as well as the king’s daughter, Princess Zaina. The marines team up with valiant Congolese soldiers, pursue the rebels, rescue Reverend Mathews and Zaina and uncover ‘blood gold’ transactions.

A fast-paced, gripping read that will keep you up all night.

About the Author
Hubert Kabasu Babu Katulondi is a Congolese freethinker, writer and columnist. He holds an honours degree in political science and public administration from the University of Lubumbashi in the DRC and a master’s degree in political science from the University of Johannesburg. He is an alumnus of the Kennedy School of Government at Harvard University.

A former governor and chief financial officer of the Congolese Center for the Valuation of Precious and Semi-Precious Minerals (CEEC), he is currently serving as director in charge of training for US–Africa Leadership and Government, USALGA (a Texas-based entity).

He has authored several books, including The Making of the Congo State in the US: A forgotten story, a new project, prefaced by Professor James Robinson (co-author of Why Nations Fail).

More in this category: « A new edition of Tony Park’s new thriller BLOOD TRAIL is out now. MANSCAPES: The Art of Producing a Fine Art Coffee Table Book through Crowdfunding. »
back to top