A new edition of Tony Park’s new thriller BLOOD TRAIL is out now. 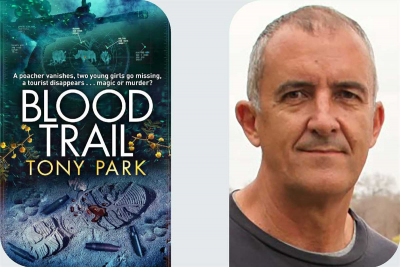 The global pandemic and medicines predating vaccines are the modern-day enemies of Africa's wildlife rangers, as explained by leading writer Tony Park, in his nineteenth novel, Blood Trail.

"As international tourism collapsed during COVID, game reserves across southern Africa reported a spike in poaching. With no tourists on the ground and fewer safari vehicles traversing game parks, poachers hunting rhino and other endangered wildlife had a field day." says Tony.

A chance discussion (pre-COVID) with a South African academic prompted Tony to research the other premise for Blood Trail - the use of 'umuthi', or African traditional medicine, by poachers and rangers alike.

A novel for our times, Blood Trail begins with Mia and Bongani conducting a virtual game drive, webcasting their search for big game to an online worldwide audience, when they encounter a rhino poacher.

"Mia is typical of a growing number of women who are breaking into and distinguishing themselves in the safari industry in Africa.  Like too many women entering industries previously dominated by males, they face prejudice and sexism, not just from colleagues and employers, but even from tourists."

Blood Trail also sees the return of one of Tony's most popular female protagonists, police Captain Susan (Sannie) van Rensburg, who now has COVID, criminals and two missing girls to contend with.

More in this category: « The Lost Language of the Soul, a new novel by Mandla Langa out in September. US Marines in the Congo-Beni War - based on true events. »
back to top