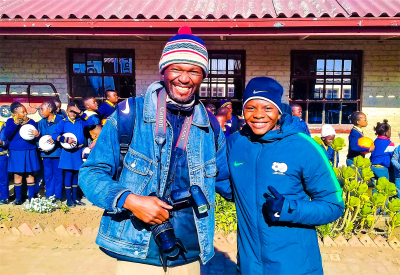 A group of young ladies, all told 30 of them in number, are relaxing in the lounge of an abode far off from their various homes. Others are fixated on a soapie on television, one indulges in a packet of crisps whilst others engage in banter punctuated by carefree laughter. At the corner to the door of an adjoining room, the youngest of them takes in the scene before her enviously with puppy eyes – silently pleading to be let in on the fun time. But she cannot as schoolbooks in her room have to be read,seeing as – since she’s still a schoolgirl – she has impending examinations to write. "Go back!" A voice of an older girl commanded instantly upon spotting the truant individual. The same voice chides insistently, "Thembi, go study!"

That scenario played out pending a Banyana Banyana camp as South Africa’s footballing ambassadresses embarked on a quest to realize what has never been achieved previously: qualify for the Women’s FIFA World Cup – then scheduled to be hosted by France in 2019. That circumstances even necessitated such a conundrum largely bore testament to the destiny with stardom of the trespassing youngster in discussion, namely, Thembi Kgatlana – as it simultaneously did (and continues doing) with the value her minders put on both her talent, as well as her tiny shoulders. In a way, at the time, she was a victim of her own athletic prowess – enjoined to represent her country at international soccer whilst still a high school student.

That anecdote is recalled in a chapter titled, Books and Boots, of the latest offering by the author of the preceding Jacana Media published tome, The Curse of Teko Modise, Nikolaos Kirkinis. Named, Strike a Rock – The Thembi Kgatlana Story, the unputtable down paperback delves into the environs and circumstances which converged to sculpt one precocious lass into the female version of what Benni McCarthy meant for the country’s masculine soccer aspirations and passion! Related in simple, even dreamy, linguistics that even a primary school-going pupil can comprehend – the biography narrates the extraordinary destiny of a Mohlakeng-raised girl with tomboy inclinations which culminated in her pitting her soccer ability against boys enroute to later discovering that she could eke a living from a sport she excelled at. Kgatlana’s developmental path is distracted by domestic issues such as her delinquent half-brother’s runs-in with the law and the law’s periodic disruptions of her family’s liquor selling livelihood.

Kirkinis vividly paints the envious destiny of a streetwise athlete who got to be globetrotter at a very young age, as her talent got her to faraway lands such as the US, China, Portugal and Spain – as a contracted professional soccer player – as well as many countries constituting the African continent and others where national duty called!

The Thembi Kgatlana I know Positioned along fellow photographers behind the goalpost of South Africa’s Under-20s’ opponents in a contest for qualification to the 2016 FIFA Women’s World Cup, namely, Botswana, at Soweto’s Dobsonville Stadium, I noticed a young and slender player warming up in anticipation of joining in on the battle ensuing inside the field. Initiating small conversation, I soonly established that she happened to be a home girl of my neighbourhood of Mohlakeng – and that her Mohapi Street was a neighbour of the Dlamini Street which I grew up in. With this coincidence making us twain, claimants hailing from the same block of the location as late greats, Patrick "Ace" Ntsoelengoe and Peter "Terror" Mathebula (the country’s very first Black world boxing champion)!

By now having garnered a reputation as an impact-making substitute, Kgatlana got stuck into the action on that July of 2015 fixture and from her initial touches, I deduced – akin to a scout from the University of the Western Cape who one day knocked on her home’s door – that I was beholding local women football’s "next big thing!" By the immediate next weekend when she turned out at the same venue for a Rio Olympics Preliminary match – I regarded her as one of my heroines! When two years on in October of 2017 I recorded her celebrating a goal in a friendly international against Burkina Faso together with Banyana Banyana strike partner, Leandra Smeda, in Dobsonville – I mused as to how it was possible for one teenager to simultaneously represent her country across three age categories!

In June of 2019, upon Banyana Banyana’s return from their maiden appearance at the FIFA Women’s World Cup in France – at which Kgatlana scored a wonder goal (the first South African woman ever) against Spain, we re-acquainted at Meadowlands’ Sivelile Primary School on the occasion of LaLiga’s #Pass the Ball initiative, whereat she assisted with the distribution of soccer balls to pupils. Requesting me to send her imagery from the occasion – she was soon off to China to turn out for that nation’s humongous capital’s club, Beijing BG Phoenix. The season before, her erstwhile mentor, Vera Pauw, had recruited her to feature for an outfit named Houston Dash in the US and following upon her Chinese sojourn, Portugal’s elite club, S.L. Benfica registered her in 2020 – a stint which turned out to be brief, with her moving on to Spain’s Eibar and presently to Atletico Madrid.

When I e-mailed her the batch of images from her Meadowlands appearance, I added a note that I regarded her as "my home girl" – something which chaffed Africa’s superstar!

More in this category: Warriors:An Epic Battle for Olympic Rowing Victory by Danielle Brittain. »
back to top