Will Smith to star in film about tennis icons Venus and Serena Williams. 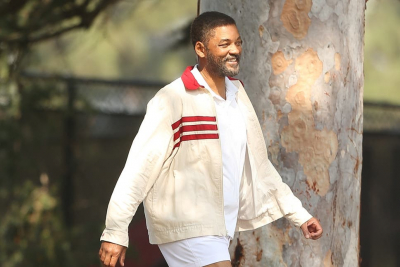 Will Smith on set of King Richard / SplashNews.com.

Will Smith stars as Richard Williams, the father of Venus and Serena, in the first trailer for King Richard, a film about how Williams helped coach the Compton-raised sisters into tennis stars.

Venus and Serena Williams along with sister Isha Price, serve as executive producers on King Richard, which Warner Bros. says "highlights one father’s relentless drive and unapologetic vision to change the game."

"I don’t mind you saying we’re hard on these kids because we are," Smith’s Williams tells a social worker in the trailer. "That’s our job. Keep them off these streets. You wanna check on the kids? Let’s check on the kids. We got a future doctor, lawyers, plus a couple tennis stars in this house."

King Richard, directed by Reinaldo Marcus Green, will arrive in both theaters and on HBO Max on November 19th.

More in this category: « Warriors:An Epic Battle for Olympic Rowing Victory by Danielle Brittain. Go Play Inside - What Video Games Can Teach Us About the Game of Life by Gareth Woods. »
back to top