Just a Moment: A Memoir by Schalk Burger Snr. 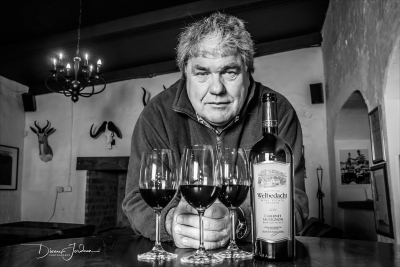 Schalk Burger Snr is a former Springbok rugby player and businessman. He runs Welbedacht wine farm in the Western Cape. Michael Vlismas is an award-winning sportswriter who has written several books, including ones with Gary Player and Tim Noakes.

The book is not about rugby alone - far from it - as Burger opens up on being a wine farmer, cultural custodian, musician, father and grandfather.

It is a personal and honest journey through the triumphs and hardships that have shaped the life of on of the country's most recognisable rugby figures.

A burly man found himself huffing and puffing through some bushes and over a hill alongside others in the dark of night somewhere around the Eastern Cape town of Cradock. Moments earlier, at a township tavern, the owner had abruptly warned him, "They’re coming to kill you!" The running man, a rugby lock forward, was a White man who dared venture into a Black area watering hole at a time when South Africa’s then race issue had once again reared its ugly head following on the abduction and murder of the Cradock Four, pending the tumultuous mid-80s of PW Botha’s rule.

This encounter played out in a chapter titled, The First White Springbok Selected from A Coloured Team, from Schalk Burger Senior’s memoir, Just A Moment – a delightful tome co-written with award-winning sports writer, Michael Vlismas. Burger, 2007 World Cup-winning ex-Springbok SchalkJunior’s dad – and himself once a rugby Springbok – was then playing for a Coloured rugby club when he was told to get the hell out of the tavern.

The incident formed part of many lived experiences only a raconteur of his ilk could bring back to life – a life evidently fulfilling and filled with acquaintanceships with the who’s-who’s’ of South Africa and the broader international community. Burger, the Welbedacht wine estate owner will enthrall you with recollections of sharing dinner with Eugene Terre’Blanche over bottles of Bellingham Johannisberger; playing bridge with Apartheid-era prime minister, John Vorster; being friends with Rhodesian prime minister, Ian Smith; his friendship with Johann Rupert (through whom he got to meet Hollywood A-listers); crying together with Nelson Mandela after the ordeal suffered by his daughter, Rene’; raising a Springbok (Schalk Jr.); attending a Formula 1 Grand Prix race with once SA rugby honcho, Dr Louis Luyt; assisting with the establishment of the Breytenbach Sentrum (capping it with poet, Breyten attending its opening along with his famous siblings), etc.

Born of a mother who was a Black Sash member and a father who fought in WWII, Burger – a tenth generation Afrikaner who couldn’t even speak Afrikaans whilst growing up – is of Prussian ancestry –a self-made man who grew up "on the wrong side of Paarl." Just A Moment – made available by Jonathan Ball Publishers – is a memoir of a patriot; a father who nurtured his children well in life (golf, surfing, hunting, etc.) and a successful businessman who transcended life’s hard knocks!

More in this category: « Waterboy - Making sense of my son's suicide by Glynis Horning. Alone. Together. Loved. Forever. by Ingrid Lomas - A Memoir. »
back to top