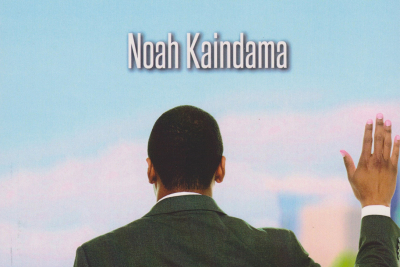 Retired teacher and school adviser Noah Kaindama, is on track for topping the charts and influencing future African leaders. The 65-year-old father-of-four has just released the gripping and thought-provoking sequel, The Real President II: Africa’s Last Line of Defence. And it has already reached number four in Amazon’s Political Fiction chart.

The first novel, The Real President, charts the many perils of Moses Kamawu as he decides to challenge the incumbent tyrant president who has run down his country - a seemingly brave but increasingly dangerous mission. The president is brutal, stubborn and accustomed to ruling with impunity. Yet, drawn into Moses’ irresistible vision, ordinary citizens band together and fight to usher change into their country. It is a must read not only by aspiring presidents but all citizens who are faced with the dilemma of casting a vote to bring about positive change.

Noah, admits much of his narrative derived from conversations with his four graduate children. He explained: "The Real President: Africa’s Last Line of Defence examines a possible future where good leadership and citizenship is allowed to flourish in the fictional African country of Lubanda. "It also shows how the struggles that one woman must endure to carry her country forward and bind the continent together. The idea for the sequel was inspired by fans who read the first book and asked for more. The main storyline was inspired by the conversations with my children who argued that something ought to be done to help improve leadership in Africa. I therefore hope these books will inspire the young generation."

"The Real President and The Real President II are therefore aimed at individuals and organisations interested in promoting good governance and African led development for the people of Africa – from political groups, ordinary voters, the African middle class, students, teachers, lecturers and academic departments."

Noah Kaindama is the former Hertfordshire, U.K. Education  Adviser, who also served as a teacher in Zambia, Botswana and the U.K. and studied at the University of Zambia, South Africa and Stellenbosch, was a prize-winning poet during his days at Kwame Nkrumah Teachers’ college in Kabwe, Zambia. He didn’t take up writing as a serious hobby until closer to his retirement from education.

About the Author.
Noah Kaindama was born in Zambia. He has worked in education all his working life. He holds a M.Phil in Technology Enhanced Language
Instruction; B. A. Hons Applied Linguistics; and B. A. Ed. English Language and Literature. He won a writing competition prize in 1979 at college but never took up writing seriously until now. For more information go to www.realpresident.co.uk.

More in this category: « SA billionaire releases coffee table book to benefit 143 charities on a global scale. Tsitsi Dangarembga awarded 2021 Peace Prize of the German Book Trade. »
back to top